Janice Lewis, who went missing Tuesday afternoon, was found a little over 24 hours later with the help of social media. Her older brother started a Facebook and Twitter campaign to help locate his 17-year-old sister, who suffers from autism. Celebrities, including Talib Kweli and Sean Combs, retweeted Lewis’ picture to their followers. One Twitter user recognized the young girl walking down a Brooklyn street and called the police. She was safely returned to her family late Wednesday.

“I don’t even know what a tweet is,” said Lewis’ mother, Keri. “It’s amazing how it took something I don’t understand to get her home.”

Lewis fell asleep on the train on the way home to the Highbridge neighborhood of the Bronx, from Manhattan High School on the Upper East Side, where she is a senior. She woke up near Coney Island, unable to find her way around. She has not told her family any more details about what happened during the time she was missing. Police say that she may be traumatized and hope that after returning to her daily routine, she may begin to talk.

Diagnosed with autism at the age of three, Lewis has limited short-term memory and sometimes gets confused. Up until a month ago, she rode the train home from school everyday with her younger sister Brittany, 15. But when Brittany’s schedule changed, Lewis declared that she was ready to ride the train by herself. “I felt secure about it,” said her mother. “I felt as though she was ready.”

Friends from school walked with her to the Uptown D train at 42nd Street on Tuesday. They were the last to see her before her dissapperance. The next day a group of worried students walked out of Manhattan High School trying to find their friend, but were brought back to talk with counselors.

Lewis plays basketball for her high school team, sang, and played keyboard and bass guitar for her church choir. She loves Lebron James.

Lewis’ five siblings, grandma, cousins, aunts, uncles, and family friends gathered at her home while she was missing waiting for news on her whereabouts. Nobody slept until she was found.

The tight-knit family posted flyers of the missing teen as far as Brooklyn. Family members who work for the MTA alerted commuters. And Lewis’ older brother Christopher, 24, hit the social media sites.

They didn’t lose hope, while holding on to recent memories of Lewis wrestling with her brothers on Thanksgiving and being baptized with her sister last Sunday, among many more. “I remember when she was born,” her brother Christopher said. “She would follow me everywhere I went, not saying a word, just tugging at my coat. She made me realize what it was to be a big brother.”

The family is ecstatic that she was found. “We just want to thank everyone who posted her picture on Facebook and Twitter,” said her mother. “We are so grateful to have her home.” 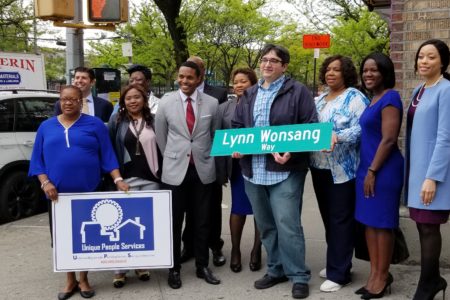