The New York City Police Department is asking the public for assistance with locating and identifying the individuals in the attached photographs, who are wanted in connection for a grand larceny that occurred within the confines 44th Precinct/Transit District 11. 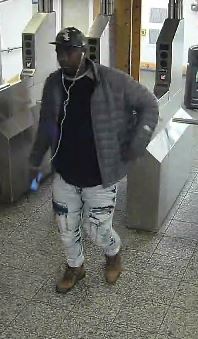 It was reported to police that on Wednesday, November 7, 2018 at approximately 02:35 a.m., a 37-year-old male victim entered the train station at River Avenue and East 161st Street and was waiting for the northbound D train on the bench. As the train approached, the male boarded the train and then realized that he left his wallet on the bench. He tried to exit when the doors closing and saw an unknown male pick the wallet. There was a transaction made from the victims EBT card inside of 445 East 163rd Street at 08:13 a.m. by an unknown female for $173.13.

The first individual is described as a male, Black and has medium build. He was last seen wearing a black baseball cap, gray jacket, light blue ripped jeans and tan workbooks.

The second individual is described as a female, Black and was last seen wearing a blue hooded jacket.

Photos of the suspects ares attached and available at DCPI.