Today is the kick off of the Sunnyside Greenmarket season. The farmers market is located on Skillman Avenue between 42nd and 43rd Streets, and will feature nearly a dozen vendors.

The greenmarket will provide locally grown produce to the surrounding communities every Saturday from 8am to 3pm from June through November.

“I am very excited to be managing the Sunnyside Farmers’ Market this 2009 season. It is my hope to bring local musicians, artists, performers and community building activities to the market,” said Sunnyside Greenmarket organizer Danielle Seidita. “I will be there every Saturday to listen to the community’s ideas and needs for developing the market. I want to thank the farmers and the community members for making the market a fabulous place to spend a Saturday afternoon.”

This is only the sixth  Greenmarket to open in the borough of Queens. Overall there are 46 greenmarkets located throughout New York City, the large majority of which are in Manhattan. Greenmarkets are organized and operated by the Council on the Environment of New York City, a privately funded citizen’s organization in the Mayor’s Office. Greenmarkets have been functioning in New York City since 1976. Almost 200 local farmers and fishers participate in the markets and sell the various sundries they grow, raise, catch and bake.

The Council on the Environment of New York City is committed to conserving farmland and promoting environmentally sustainable production methods through the greenmarkets. They also run education programs to teach urban youth how to eat more healthily. Any unsold produce from the markets is donated to feed the hungry in New York City. In 2005 greenmarket farmers and bakers donated over 300,000 pounds of food to City Harvest.

Other greenmarkets in Queens include the Long Island City Greenmarket, which will open on July 11th and will run Saturdays from 8:00 a.m. to 3:00 p.m. through November 21st. More information on other greenmarkets throughout New York City can be found by visiting the webpage of the Council on the Environment of New York City here. 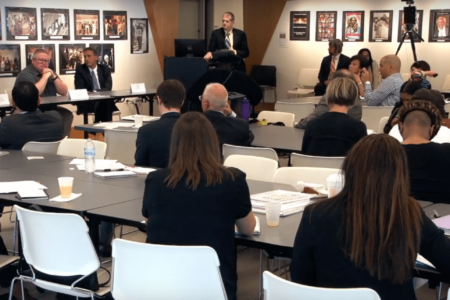