“You, the guy with the white shirt, I salute you,” he repeats.

The guy with the white shirt is Batallion 26 Chief Joel Gerardi. He is putting on his uniform shirt in preparation for a small memorial to honor the friends and colleagues he lost 10 years ago. The day before the planes hit the World Trade Center, Gerardi was a junior fireman; the day after – a senior. “That usually takes a long time but we lost a lot of people then,” he says.

It is 8:46 a.m. All fire fighters at the station in Morrisania line up in two lines with their heads turned south, looking at the horizon toward Ground Zero. Gerardi and his colleagues stand motionless for a moment of silence.

The attack did not change Gerardi’s values, he says, but they changed his life. “A lot of people who were part of my life no longer are.”

Gerardi was not supposed to be at work that day, 10 years ago. But he rushed from home to Ground Zero a little after 10:28 a.m. when the North Tower collapsed. “Everybody was buried by the time I got there,” he says.

This is part of the job, Gerardi says. “We’ve been going to fires for years and years. What changed 10 years ago is that we’ve been first responders ever since.”

It is 9:02 a.m. – the moment the South Tower was hit. The fire fighters line up for a second moment of silence.

The only other person now with Ladder Company 19 who was a fire fighter 10 years ago is Billy Gerondel. It was his first day on the job but he didn’t have to report on duty until 7 p.m. He was home in Brooklyn. When he heard on the news that planes had crashed into the Twin Towers, he sped toward Manhattan but could not get to the island because all bridges were closed. Eventually, he did cross, and was at Ground Zero after the World Trade Center Building 7, a 47-story skyscraper, collapsed at 5:20 pm. It was the closest he’s been to a war zone. “All you could do is walk through the rubble,” he says.

Ten years later, he remembers the attacks far more than once a year. “Every time the weather is cloudy, I think of that day,” he said. All he could see when he looked up was ashes and what looked like dark grey clouds, he says.

Gerondel lost friends he had jogged with just the day before. “One day we’re doing our thing, the next day…,” he breaks down in silence, trying to keep emotions to himself. There is no special coping mechanism to get over what happened, he says. It may sound cliché but “you just keep living,” Gerondel says.

It is 9:15 a.m. The firefighters are all getting ready to go to a memorial service on Melrose Avenue. No one stays behind. “We’re taking our radio with us,” the fire fighter, who will drive the engine, says. “We are going to respond from Melrose if necessary.” 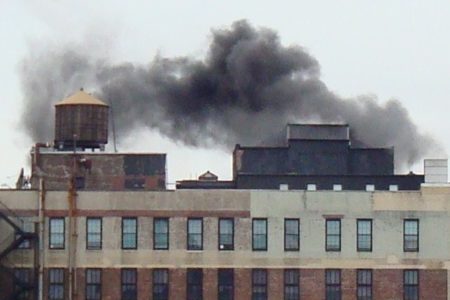