The New York City Police Department is asking for the public’s assistance in identifying the individual depicted in the attached photograph in connection to a menacing incident that occurred within the confines of the 46 Precinct in Bronx / Transit District 11.

It was reported to police that on Monday, October 28, 2019, at approximately 0940 hours, aboard a southbound “4” train at Jerome station and E. 176 Street subway station, the individual brandished a blue box cutter and followed a 41-year-old female victim while in the train car as she was moving away from him. The individual then exited the train at Jerome Avenue and E. 161 Street subway station in an unknown direction.

There were no reported injuries as a result of this incident.

The individual is described as a male, Black, approximately 20-years-old, 6’0″ to 6’2″, 140 lbs.; with a slim build and last seen wearing a dark green hooded sweater with the word “ADIDAS” logo on the front of the sweater, blue sweatpants, black sneakers and black backpack. 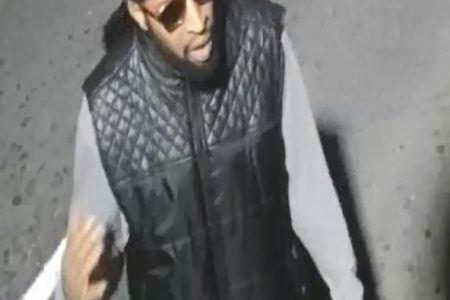