New York Secretary of State Lorraine Cortés-Vázquez today announced she has deemed parts of northeast Bronx and eastern Queens cease-and-desist zones in order to prevent real estate agents from repeatedly soliciting homeowners in those neighborhoods to place their property for sale.

“The purpose of the cease-and-desist rule is to protect the public,” Secretary Cortés-Vázquez said. “After studying this issue for the last year, and hearing evidence that homeowners within the proposed zones have received frequent mailings, unwanted flyers, and pesky telephone calls, as well as door-to-door visits soliciting the sale or listing of their property, we have determined that placing parts of the Bronx and Queens under the cease-and-desist rule will protect the thousands of New Yorkers in these neighborhoods who are planning to remain in their homes for the foreseeable future.”

As determined by the Secretary of State, the cease-and-desist zones in the Bronx and Queens are as follows:

An additional cease-and-desist zone currently exists in Brooklyn and is set to expire on Nov. 30, 2012:

· The exact boundaries of the cease-and-desist zones in the Bronx, Queens and Brooklyn can be found on the Department of State homepage.

New York State Real Property Law permits the Department of State to adopt rules establishing cease-and-desist zones for defined geographic areas if it is determined that property owners in that area are subject to intense and repeated solicitation by real estate brokers and salespersons to place their property for sale. Cease-and-desist zones are effective for five years, after which the Secretary of State may re-adopt the rule for an additional period of time up to five years.

In the last year the Department of State held three public hearings to determine if the rules should be readopted – two in Queens and one in the Bronx. Based on testimony at the hearings and additional documentation submitted to the Department, the Secretary determined that some homeowners residing in portions of the Bronx have been subject to intense and repeated solicitation. The Secretary also determined that, while insufficient evidence exists to readopt a cease and desist order for all of Queens County, certain portions still are subject to intense and repeated solicitation and should be protected by a cease and desist rule.

Upon the establishment of a cease-and-desist zone, a homeowner may file a statement of desire not to be solicited with the Secretary. The Secretary will then publish a list of the names and addresses of those who have filed the statement, and brokers and salespersons are prohibited from soliciting persons on that list, referred to as the cease-and-desist list.

Other communities throughout the state of New York facing repeated and unwanted solicitations from real estate agents are encouraged to report them to Department of State. 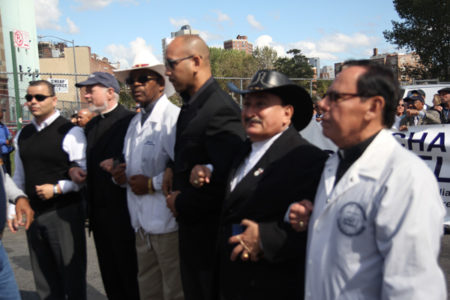 Advocates To Obama: Keep Your Promise