Sgt. Victor Arroyo, network operations supervisor for Regimental Combat Team 6, works at his computer while sipping on a hot cup of coffee in his work space aboard Camp Ramadi, Iraq, May 1, 2009. 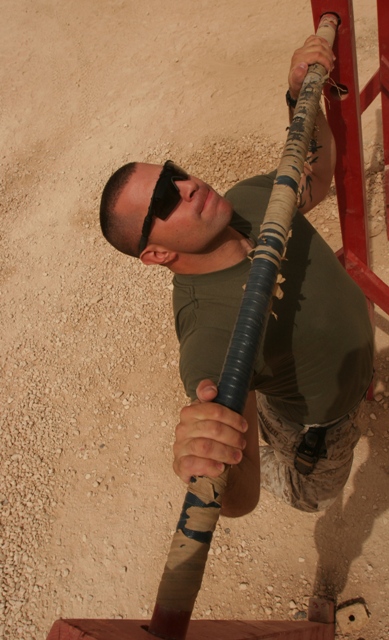 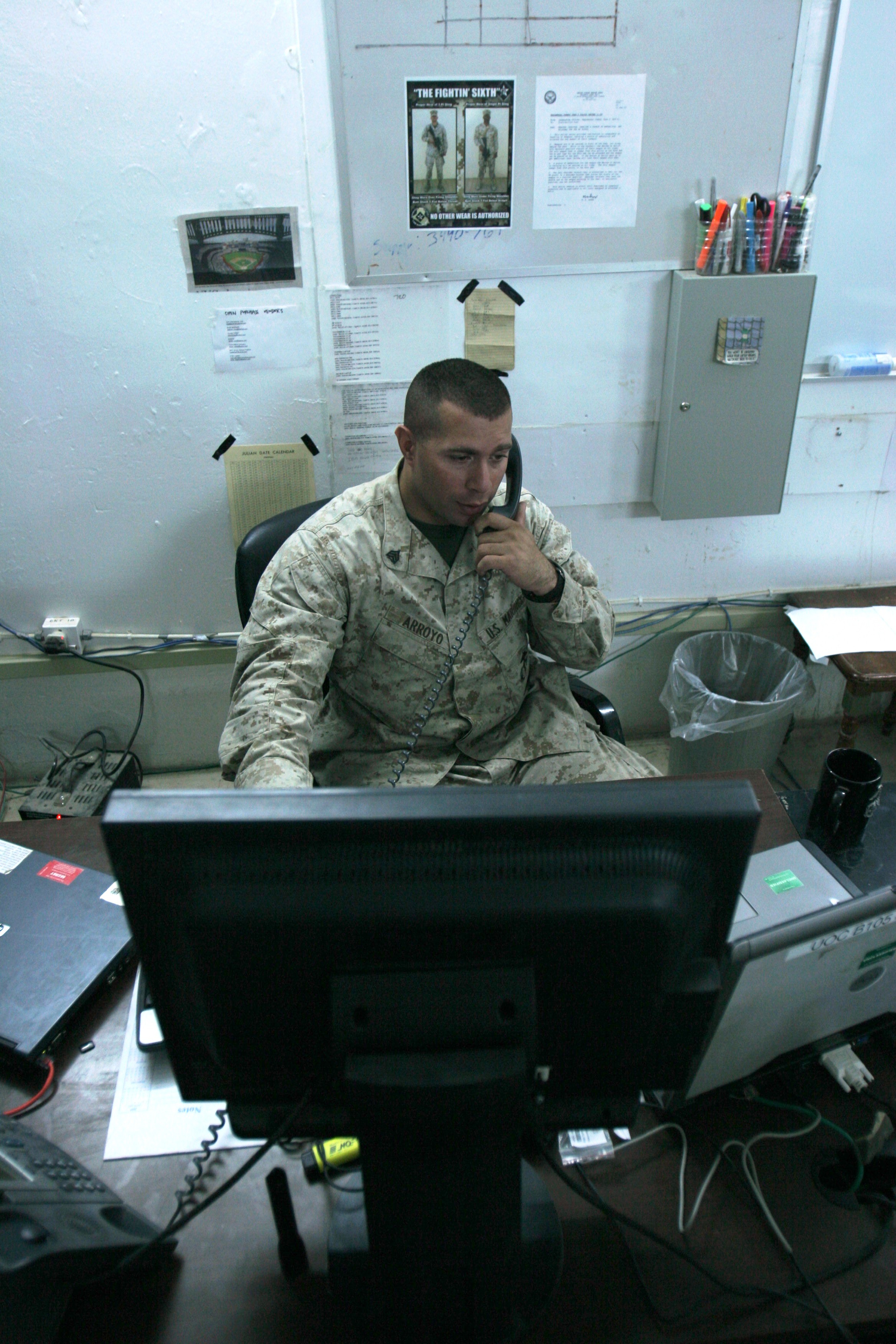 Camp Ramadi, Iraq – After receiving a letter informing him he was too old to be a Marine, the former youth counselor from the Bronx was determined to prove he possessed the character and grit to walk across Marine Corps Recruit Depot Parris Island’s Peatris Parade Deck wearing the Eagle, Globe and Anchor.

Currently serving in Ramadi, Iraq, as the network operations supervisor for Regimental Combat Team 6, Sgt. Victor Arroyo was not guaranteed anything at the recruiter’s office like many other Marines. Managing to enlist even though he was two years past the cut-off age for enlistment. Raised in the Bronx, New York, Arroyo left for Marine Corps Recruit Depot Parris Island, S.C. at age 31. The now 34-year-old Marine considers every day in this Marine Corps a blessing.

Shortly after his mother, who had been teaching more than 20 years was laid off, Arroyo, who was born and raised in Bronx, New York, knew that his chances of retaining a position in the school district as a youth counselor were slim. Though his mother was able to find another teaching job, Arroyo saw this as an awakening rather than a misfortune. The Marine Corps was calling.

As a teen, Arroyo was a young Marine cadet, an organization similar to Young Marines. Arroyo participated in field training events and competitions with other cadets throughout the state of New York, and as a cadet, learned how to properly press his utility uniform, shine his boots and utilize the phonetic alphabet and military time.

When he wasn’t taking part in field exercises with the cadets, he was at home in a full house, with his mother and a number of guests. Arroyo did not see much of his father growing up.

Living in a neighborhood infested with violence and drugs, his father was a part of that life. He tried to escape it but no matter what happened, he found his way back, said Arroyo. Although Arroyo was aware of his father’s actions, more positive role models influenced him.

Growing up, his grandfather, a soldier who served in Korea, told Arroyo stories of hard-knuckled Marines and how well they carried themselves on the battlefield and in training. “He used to always tell me to join the Marines; that they are the best,” said Arroyo.

One story in particular stuck out, according to Arroyo. His grandfather had traveled many places in the world and one joint-training cycle alongside United States Marines led to his participation in one of the Marine Corps’ most significant battles during the Korean War.

Arroyo’s grandfather fought with the Marines during the amphibious assault at Inchon in 1950, a battle that resulted in victory and a swing of momentum in favor of U.N. forces during the early days of the Korean War. Arroyo would hear much more about the Marines as time went on.

After high school, Arroyo married and eventually became a father of two. Choosing to stay with his family rather than pursue a career in the military, Arroyo began working with kids. In 1996, he began work at a private facility for emotionally disturbed youth.

“It was something different every day,” said Arroyo. “There was no routine.” For many years, Arroyo stayed close to the youth in his city, working with gang members and helping troubled youth with their General Education Development test, college courses, and sometimes simply finding jobs.

“I enjoyed what I did but I was looking at the writing on the wall,” said Arroyo. “The New York Department of Education was shaky. The only thing I wanted to do besides work with kids was be a Marine.” Ten years later, Arroyo was standing outside a Marine recruiter’s office. The afternoon he walked in, Arroyo told the recruiter, “I am 31 and I want to be a Marine.” Arroyo was told to come back tomorrow if he was serious. At 9 a.m., the recruiter walked up to the locked office to find Arroyo standing outside, anxious to follow a dream.

The recruiter began his presentation on what the Marine Corps had to offer. Politely interrupting the Marine recruiter, Arroyo had his own speech prepared.

“I am not 18 years old; I am not a high school senior. I am divorced, I have kids, and I have a career. Can we just pull out the contracts and start signing?” said Arroyo.

After a number of waivers were reviewed and accepted, he was on his way to boot camp. Days before leaving, an early online-survey with his age registered an automatic response letter from the office of former Marine Corps Sergeant Major, Sgt. Maj. John L. Estrada.

“We regret to inform you…” the letter read. As he continued reading, the letter explained that age limitations conflicted with his hope to enlist. Ready to set feet on those yellow footprints, Arroyo put the letter back in the envelope and saved it for his return from boot camp.

On January 12, 2007, Private First Class Arroyo walked toward his grandfather in his dress blue uniform, as the honorman of his platoon.

Staff Sgt. Juan Angeles, the Regimental Combat Team 6 Information Assurance Chief, has monitored and mentored Arroyo since he came to the operating forces as a private first-class.

“He was locked on,” said Angeles. “He would always take opportunities to direct whatever was going on.” Not the common Marine, Arroyo’s experience working with others contributed to his ability to lead others in the work space.

“In the rear, even as a private first-class, he would basically take charge of the group,” said Angeles. “He can easily take the lead on anything. I am sure he will excel at whatever he is doing.” Looking toward the drill field as his next challenge, the man who was told he wouldn’t be able to become a Marine hopes to one day transform civilians into Marines. Now in Iraq, meritoriously promoted to the rank of sergeant, Arroyo doesn’t see an end in sight for his potential future in the Marine Corps.