“I am deeply concerned about the Administration’s embrace of processed dredged material in City parks and its plans to allow its use in both public and private development projects,” Thompson said in a recent letter to Mayor Bloomberg. “At a minimum, the public must be provided with complete information and firm assurances that their families will be safe not only now, but in the years to come.”

The City currently plans to use the dredged material as fill at a number of parks including Heritage Field – on the site of the former Yankee Stadium – and Brooklyn Bridge Park at the base of the Brooklyn Bridge. However, Thompson said, about two-thirds of the material in the harbor resulting from dredging is too contaminated to be placed in the federally designated offshore site, according to the U.S. Army Corp of Engineers. This toxic contamination includes unacceptably high levels of PCBs, dioxin, mercury and various heavy metals. Therefore, it must be “processed” and stored at alternative locations.

Traditionally, processed dredged material has been used to fill mines in Pennsylvania and cap landfills and brownfields or sent to designated disposal locations out-of-state. In addition, some material has already been used at the Fresh Kills Landfill on Staten Island.  With appropriate safeguards, it also may have potential in commercial development projects.

“While I am advised that the material will be tested by City contractors and its placement will be approved by the state, I must insist that the Administration provide appropriate details regarding the quality of this fill and the safeguards it intends to adopt before it continues to place this material in our City’s neighborhoods,” Thompson wrote.

“My office is awaiting additional information about the City’s Dredged Material Management Plan, but as of this moment has not received it,” Thompson said. “Given that this harbor sediment has already been placed in the Bronx Terminal Market Waterfront Park, and there is a question of the public’s safety, it is imperative that City Hall understand the urgency of providing the public with as much information as possible.  The people of New York City deserve to know when and how this material was placed in their park and the potential for cross contamination.” 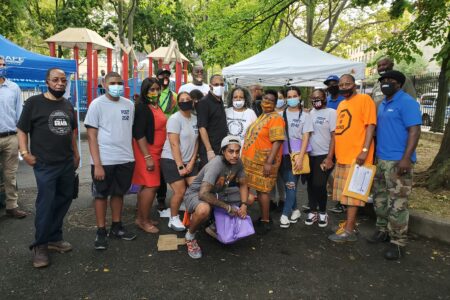