This Wednesday, the Health Department and community partners will gather at the New York Botanical Garden to celebrate the anniversary of “The Bronx Knows,” a borough-wide HIV testing initiative launched one year ago.

During the event, Dr. Monica Sweeney, Assistant Commissioner for HIV/AIDS, will announce that participating clinics, hospitals and community organizations have increased HIV testing by approximately 28% since the initiative began.

As one of the nation’s largest single-jurisdiction HIV testing initiatives to date, the Bronx Knows provided voluntary tests to nearly 160,000 Bronx residents in the past year, including many of the 250,000 who have never been tested before. Wednesday’s event will honor the agencies and community partners that have worked together to reach this benchmark (a complete list of partners follows this release).

“Knowing your status is one of the best things you can do to stop the spread of HIV,” said Dr. Thomas Farley, New York City Health Commissioner. “Bronx residents are taking the lead by getting tested. We thank the many groups and health care providers who helped make this possible, and encourage all New Yorkers who don’t yet know their status, to get tested.” The Bronx Knows coalition includes more than 60 community partners, including all Bronx hospitals and major community health clinics, 19 community-based organizations, as well as several universities and faith-based organizations.

“This initiative has helped us work with diverse organizations to achieve common goals,” said Dr. Susan Amenechi-Enahoro of the Morris Heights Health Center. “The collaboration helps us link patients to care so that by June 2011, all of the Bronx residents who don’t ye know their status will have that vital information.”

“The Bronx knows that getting tested helps everyone,” Dr. Sweeney said. “People who test negative can be reassured and learn how to stay that way by practicing safer sex. People who test positive can get the treatment they need and take even greater precautions to avoid spreading the infection to others.”

New York City has long been the epicenter of this country’s HIV epidemic. Some 3,787 New Yorkers were diagnosed with HIV in 2007, and 921 of them were already sick with AIDS by the time they learned their status – meaning they had gone undiagnosed for an average of 10 years. In the Bronx, 876 residents were diagnosed with HIV in 2007, and a quarter of them were already sick with AIDS. Bronx residents account for nearly a fourth of New York City’s HIV diagnoses and more than a quarter of HIV-related deaths each year. HIV diagnosis is not a reliable measure of actual HIV incidence (new infections), but estimates derived from a formula developed by the Centers for Disease Control and Prevention suggest that 72 of every 100,000 New York City residents were newly infected in 2006, compared to 23 per 100,000 nationally. This suggests that nearly 4,800 New York City residents contracted HIV in 2006. 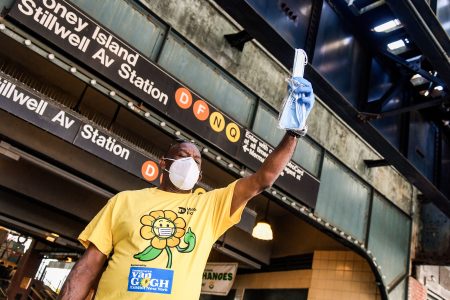