The New York City Department of Environmental Protection (DEP) today announced that a new, Unified Stormwater Rule (USWR) requires newly developed or redeveloped properties to more effectively manage stormwater on-site. By retaining more stormwater on site, the USWR will help to keep the City’s drainage system from being overwhelmed during heavy rainstorms, which otherwise can lead to flooding, backups into homes and businesses and overflows into waterways. Modeling projects the rule will result in the reduction of Combined Sewer Overflows citywide by approximately 360 million gallons annually by 2030, helping to further improve the health of New York Harbor.

“We have all witnessed how climate change is creating stronger and more damaging storms in New York City and this common sense update to our Rules enlists property developers in our collective effort to create a more resilient city,” said DEP Commissioner Rit Aggarwala.  “Cities across the world are following our green infrastructure model where we have committed nearly $2 billion and built more than 11,000 stormwater assets and now, as properties are newly developed or redeveloped, they will include plans to retain stormwater on site to help to reduce flooding, enhance public safety and improve the health of our waterways.”

“Our City saw the devastating effects of last summer’s Hurricane Ida and Tropical Storm Henry where neighbors drowned in their own basements and our streets and subways flooded. Our centuries old stormwater systems are not built to handle the barrage of rain that comes down every year and we need a collective effort to preserve and green our city’s waterways. The new stormwater rule is a common sense step in ensuring that any new infrastructure we build can handle the next superstorm and build a more resilient city. That is why we fought for these requirements in Gowanus to prevent additional Combined Sewer Overflow from going into the Gowanus Canal, and worked to require these changes citywide. I look forward to working with the Department of Environmental Protection to measure the impact of the new stormwater rule as it goes into effect,” said New York City Comptroller Brad Lander.

“Climate change is one of the biggest threats facing our city.  At least 16 lives were lost during September’s Hurricane Ida – most of them in basement apartments. This is largely because our infrastructure could not handle the speed and intensity of Ida’s rainfall. Approximately 72 percent of New York City’s surface is impervious, which means that runoff from rainfall is often channeled directly into our sewers instead of being absorbed by the land. It is crucial the city take the necessary precautions to reduce flooding and improve the overall health of our waterways,” said Council Member James F. Gennaro, Chair of the New York City Council’s Committee on Environmental Protection.

“We commend DEP staff for following through on the agency’s promise to establish the Unified Stormwater Rule,” said Mike Dulong, Senior Attorney at Riverkeeper. “Over time, the rule will drive developers to better manage their polluted stormwater, which means less local flooding, better water quality, and more green infrastructure with corresponding livable wage maintenance jobs. We hope this is the first of many forward thinking steps Chief Climate Officer and Commissioner Aggarwala will take to address the deadly and destructive impacts increased precipitation is causing in New York.”

Julie Tighe, President of the New York League of Conservation Voters said “The Unified Stormwater Rule takes a major step forward in stormwater management to support the City’s drainage system during surging rainstorms and extreme weather events we have seen in recent years that cause flooding, backups, and overflows into waterways. Communities across New York are already experiencing the impacts of extreme weather, so building resiliently and sustainably is key. We applaud the Mayor and DEP Commissioner Aggarwala for helping to further protect New York Harbor, our waterways, and our city.”

“In the era of climate change, with more intense and frequent storms, it makes perfect sense that developers constructing new projects on large parcels be required to capture and manage stormwater on site. We welcome this well-founded initiative from Mayor Eric Adams and hope it leads to further measures to prevent stormwater runoff from all new development, so as to curtail neighborhood flooding and protect New Yorkers across all five boroughs,” said Eric A. Goldstein, NYC Environment Director at the Natural Resources Defense Council.

“The Stormwater Infrastructure Matters (SWIM) Coalition applauds DEP on the Unified Stormwater Rule, which will lead to stronger protection of our waterways, as well as reduced flooding and enhanced climate resiliency for our city,” said Leonel Ponce, Chair, SWIM Steering Committee. “SWIM looks forward to working with Commissioner Aggarwala to further strengthen measures to reduce polluted stormwater and mitigate the impact of climate change.”

“Stormwater continues to be a major pollution source for our waterways, so we are very encouraged to see the improved requirements with the Unified Stormwater Rule,” said Executive Director of the Newtown Creek Alliance Willis Elkins. “With climate change increasing the need for Green Infrastructure projects that can manage runoff through nature based techniques, we applaud DEP for this step in the right direction.”

“We believe the Unified Stormwater Rule is a key initiative that will help achieve Net Zero Combined Zero Overflow as a result of new development in the Gowanus Canal as well as the goals set forth in the NYC Resiliency Plan by promoting green infrastructure on private property, easing the strain on New York City’s already overburdened sewer system, and improving water quality citywide,” said Executive Director of the Gowanus Canal Conservancy Andrea Parker.  “GCC appreciates NYC DEP’s swift implementation of the new rule in recently rezoned areas of the City, including Gowanus, and we look forward to working with the Department to track the new rule’s impact on water quality in Gowanus.”

The USWR updates and aligns Chapters 31 (stormwater quantity and flow rate requirements) and 19.1 (construction/post-construction permitting program water quality requirements) of Title 15 of the Rules of the City of New York.  Under the Chapter 31 amendments, the USWR increases the amount of stormwater required to be managed on a property and further restricts the release rates for all new and redevelopment projects that require a DEP House or Site Connection Proposal. Additionally, under the Chapter 19.1 amendments, existing requirements for areas of the city with separated sewers will expand into the areas of the city that are served by combined sewers and will now apply to sites that disturb 20,000 square feet or more of soil or create new impervious surfaces of 5,000 square feet or more. These properties will be required to apply a green-infrastructure-first approach, employing techniques such as rain gardens, permeable pavers, and green roofs. A new New York City Stormwater Manual accompanies the USWR to provide clear guidance on requirements and design options. The green infrastructure requirements will benefit the City by reducing combined sewer overflows and preventing polluted stormwater from discharging directly into local waterbodies.

In September 2020, the New York City Council passed Local Law 91 enabling DEP to move forward with the Chapter 19.1 amendments necessary to package the new USWR.  Draft rules were published in 2021 and they become effective on February 15, 2022.  DEP held dozens of briefings for public agencies, environmental stakeholders, and the private industry in advance of the Rule’s publication. Permit applicants will experience a more streamlined design, review and permit application process and benefit from the new resources included in the Stormwater Manual.

About the New York City Department of Environmental Protection

The New York City Department of Environmental Protection (DEP) manages New York City’s water supply, providing approximately 1 billion gallons of high-quality drinking water each day to more than 9 million residents, including 8.3 million in New York City. The water is delivered from a watershed that extends more than 125 miles from the city, comprising 19 reservoirs and three controlled lakes. Approximately 7,000 miles of water mains, tunnels and aqueducts bring water to homes and businesses throughout the five boroughs, and 7,500 miles of sewer lines and 96 pump stations take wastewater to 14 in-city treatment plants.

DEP has a robust capital program, with a planned $20.1 billion in investments over the next 10 years that will create up to 3,000 construction-related jobs per year. 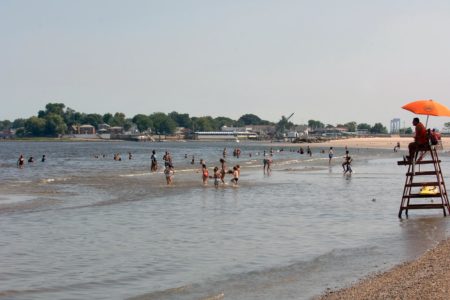 A Gem Of A Beach Sparkles This Summer In The Bronx