But the Rams found out the hard way that what Roman Stoic philosopher Seneca said is true: “It is quality rather than quantity that matters,” as the Flyers shot over 57% from the field en route to an 80-68 Atlantic 10 win over Fordham.

The loss overshadowed a solid game for Fordham sophomore Ryan Rhoomes, who recorded his third double-double of the year with 15 points, hitting all six of his field goal attempts, and a career-high 15 rebounds, while senior Branden Frazier notched 20 points, his eighth 20-point game of the season.

The Rams opened the game on fire, taking a 13-4 lead just under four minutes into the game as Fordham hit five of its first seven shots. Rhoomes paced the game-opening run with six points.

Fordham led by nine again two minutes later, 15-6, when the Flyers netted eight straight points to make it a one-point game, 15-14, on a Dyshawn Pierre jumper with 11:55 on the clock.

Dayton, who shot over 60% from the field in the first half, got the lead to five, 39-34, but a Frazier buzzer-beating layup helped the Rams trim their halftime deficit to three, 39-36.

The Flyers opened the second half with eight unanswered points to take a 47-36 lead on a Khari Price three-pointer 3:06 into the period. A Rhoomes jumper 20 seconds later halted the Dayton run and pulled the Rams to within nine, 47-38, but an Oliver layup with 16:03 left bumped the Dayton lead back to double figures and the Rams couldn’t get it back to single digits the rest of the way.

The Rams return to action on Saturday, January 18, as they travel to St. Louis to face the Saint Louis University Billikens in an Atlantic 10 contest at 2:30 p.m. (EST) in a game that will be televised live on the NBC Sports Network.

The 20 points brings Frazier’s career total to 1,381, moving him ahead of Charlie Yelverton (1968-71) on the Fordham all-time scoring list… He is 54 points behind Fred Herzog (1987-92) for eleventh… Rhoomes is now shooting 69.2% (54-78) from the field this year, tops in the Atlantic 10… His former career-high in rebounding was 14, set earlier this year against Furman… Fordham tied a season-low with 19 field goals… The Rams are now 0-3 this year when scoring under 70 points… The game was a contest between the team with the largest arena in the Atlantic 10 (Dayton – 13,226) and the team with the smallest (Fordham – 3,200)… The game was just the fourth road game of the year for the Flyers (the Rams have played eight road games so far in 2013-14)… The Fordham football team was recognized at halftime for their record-setting season… The win was the eighth in a row for the Flyers over the Rams. 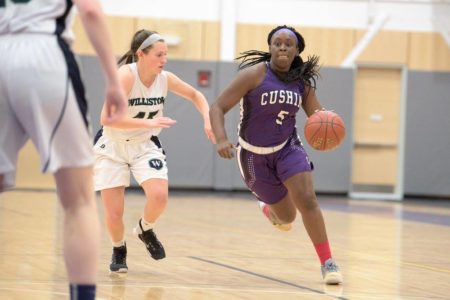