On Saturday, four Ethiopian runners from the Bronx piled into a friend’s rented Pontiac G6 and drove north to NH for the Manchester City Marathon/Half Marathon.

Yesterday, all four went home with a victory.

Lema, who finished seventh in the Baltimore Marathon three weeks ago, began distancing himself from his competitors at the 16-mile mark.

“It was the tightest marathon race I’ve ever run,” said Rowe, the 35-year-old winner of the inaugural Manchester City Marathon in 2007. “(Lema) was running smart. He was tucking behind us and putting in some surges… I tried to put some surges on the hills, because that was my strong point. He was just in better shape than me.” Rowe finished in 2:28:09, narrowly missing his personal marathon record of 2:27:51, which he set in winning the 2007 race. Titus Mutinda, a 44-year-old from Lowell, MA, was third at 2:33:55.

Women’s marathon champion Hunde broke from the pack early. Winner of the 2005 Dubai Marathon, she led comfortably by the five-mile mark and became the first woman to post a sub-three-hour time in Manchester.

“I never even saw her,” said Christin Doneski of Hopkinton, last year’s marathon winner, who finished third yesterday (3:07:10). Runner-up Strouse, a 24-year-old graduate student at the University of Maine running in only her second marathon, finished at 3:06:30.

The women’s half marathon was the day’s tightest battle. Aziza, who runs for the Westchester Track Club, sprinted to the finish to defeat Seckinger, a 27-year-old Boston Athletic Association runner who won the Hartford Marathon three weeks ago.

Aziza passed Seckinger at the 13-mile mark after lurking behind her for most of the race.

Men’s half marathon winner Merdessa, who runs for New York’s West Side Runners, spent much of the race matching strides with Koech, a 40-year-old Kenyan, before pulling away in the last mile. Merdessa finished at 1:09:45, while Koech ran 1:09:56. 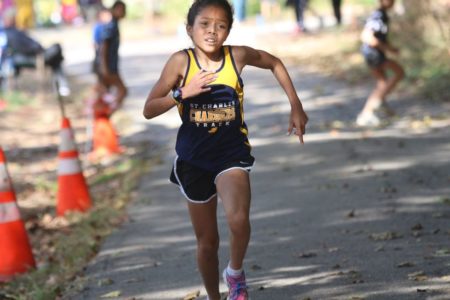