Home / News / Sport / Other... / How One Bronx Cheerleading Team Made It To Nationals

They came for the white jackets. The girls (and two boys) that make up the James Monroe cheerleading squad made history, becoming the first public school from the Bronx to qualify for the United Cheerleading Association national competition in Orlando Florida. One of the largest international cheerleading competitions, it airs on ESPN with the end goal being a trophy and a white championship satin jacket.

The James Monroe Eagles were not only new to nationals, but competitive cheerleading in general. The team came together just two years ago. With limited practice space, and very little funding, getting to nationals was a struggle.

“I never thought people like us from a poor area, not much money, could take it this far,” Malay’Ja Heard told Teen Vogue.

Malay’Ja is the team captain. Born and raised in Bronx, she is acutely aware of the advantages the other teams the Eagles compete against have.

“Sometimes I do feel a little shade when I see these other teams and they have all this money. I just wish that could be my team. Like, we could have all that money too and get all the nice things we’ve always wanted but probably always can’t have.”

Cheerleading is a cost-prohibitive sport. To even qualify for regionals the team had to pay to attend a camp. While the school offered as much financial support as it could, the kids needed help getting to nationals. Around $1,200 per person, which came out $30,000

Add this to a budget that includes multiple competitions, makeup, hair, shoes and ribbons — you cannot forget the ribbons.

As a public school in the Bronx, James Monroe deals with funding issues that have been spotlighted recently, with the confirmation of Betsy DeVos as Secretary of Education. An advocate of Charter Schools, DeVos believes that parents should have the choice on where to send their kids, with options that include both profit and non-for-profit charter schools. Critics claim this, in turn, funnels money out of public schools. Schools that are already suffering from funding inequalities.

Limited resources means prioritizing after school activities. While there are no expectations for a public school to foot the entire bill of a squad, a wealthier school usually comes with a large booster program and families that can afford to pay-to-play.

The Eagles did take part in fundraising, but it was barely a drop in the bucket so they turned to crowdfunding. With less than a month to finals, the team met its goal with help from all over the country, and was headed to Disney World.

“No luck, just skill,” This is head coach Eddie Frias’ mantra for the team, and he repeats often throughout the weekend. Frias has been in the coaching world for 11 years and was key in the creation of the squad. He came to James Monroe after the school he was coaching at closed down.

This was his first trip to nationals as well. He was taken aback at the level of athleticism from some of the squads. “It’s clear we lack some resources,” Frias said, “but we just got to keep working and building to be the best with what we have.”

Frias works with two other coaches, and he is clearly one of the tough ones. “I say, if you’re going to cry do it into your pillow before bed and come back here the next day ready to go.”

The girls may not have gotten that message. Tensions ran high from day one. Tumbles and falls dominated the first practice in the same building as the other teams. Nerves got the better of them as they headed backstage and many began to cry. Not the team captain, though. Malay’Ja was laser focused and trying to get her squad to get it together. It was tough love that, at times, was more tough than love.

It seemed to work, the Eagles moved to the final round and the tears continued.

“I was just feeling so much pressure,” junior Alima Musah. “Pressure because we came all the way from the Bronx, we have to atleast make it to the finals.”

The will to fight through the discomfort and work as a team are the qualities any coach wants for his or her players. It is what supporters of school athletics point to as reasons not to cut funding for afterschool programs.

According to a study by the National Federation of State High School Associations, students who participate in school programs tend to have higher grade-point averages, better attendance records, and lower dropout rates.

“When I first started this squad,” said Frias, “any mistake would cause them to stop and get flustered. Now they just keep going and kill the rest of their routine. I want them to take that attitude with them through college and the rest of their lives”

The final routine had a few costly mistakes with the lifts, but just as Frias said, they continued on, nailing the dance portion. Their energy was palpable and they had a feel to their performance that cannot be taught, a product of what they had to do to get to this point.

It was not enough to get them a white jacket. The girls placed 7th. That is 7th in the nation, but that distinction did not do much for Malay’Ja. The captain had cracked. She was overcome with grief and loss. As a senior, this was her last competition with her team, her family.

Next year could see some changes to the squad. One part of the school is shutting down, (James Monroe is a comprehensive high school) and two of the girls could be forced to go to a different school district. No matter the future, everyone agrees, this season was life changing. They may not have a championship, but together they made history. 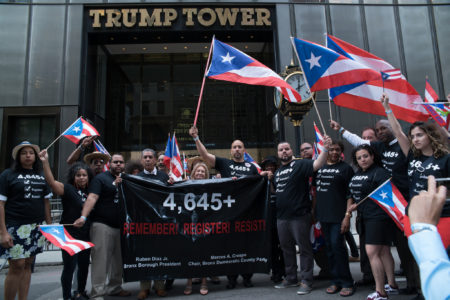