The New York City Police Department is asking the public’s assistance identifying the individual, depicted in the attached surveillance photographs and video clip, who is wanted regarding a sex assault, which occurred within the confines of the 43rd Precinct in the Bronx.

It was reported to police that on Sunday, September 19, 2021, at approximately 2110 hours, inside the Soudview Park playground, located at the corner of Boynton Avenue and Lafayette Avenue, an unknown individual approached a 53-year-old female victim and forcefully pulled her hair, causing her to fall to the ground.

The individual sat atop the victim, covered her mouth, applied pressure to her neck and began touching her body over her clothing.

The victim was able to scream, at which time the individual punched the victim repeatedly in the face.

During the struggle, the victim’s 25-year-old cousin heard her scream and came to her assistance, grabbing the individual.

The individual was able to free himself and run westbound through the park.

He was last seen walking eastbound on Bruckner Boulevard.

The victim sustained a minor laceration to her lips and redness to her neck.

EMS responded to the location and transported the victim to NYC Health + Hospitals / Jacobi, where she was treated and released.

The individual being sought as a person of interest is described as an adult male, Black, approximately 6’02” tall, weighing 150 lbs., with a thin build, and short close cut dark hair.

He was last seen wearing a gray du-rag, dark shirt, pants and sneakers.

Pursuant to an ongoing investigation, an addition surveillance video clip regarding the person of interest sought above, taken from inside of a deli / bodega at 1537 Bruckner Boulevard approximately 30 minutes after listed incident had occurred, is attached below.

Angel DeJesus, 44, Wanted For The Murder Of Belkis Lopez, 35

Mitchell Thompson, 25, Arrested For The Murder Of Mamadou Diallo, 32

Jimmy Rosario, 34, Arrested For The Murder Of Troy Scot, 40 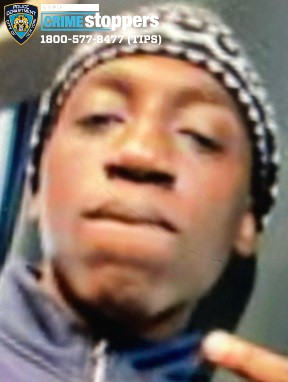