Following a pair of rough losses, the Fordham baseball team needed a big performance out of their young freshman starter Chris Pike to get the team back in gear against St. Bonaventure. Pike delivered on Sunday, allowing just one run over eight innings of work with eight strikeouts, as the Rams defeated Bonnies, 9-1, at Houlihan Park.

Unlike the last two days, it was Fordham that grabbed the early lead in the first inning. Nick Martinez drew a lead off walk followed by a ground ball to second by Ryan Lee. St. Bonaventure’s Jason Radwan fielded the ball trying to get Matinez at second, but his throw went wide, allowing Martinez to go to third and Lee to second. Chris Walker then delivered an RBI-single to score Martinez, extending his hit streak to 12 games. Ryan David followed with another RBI-single to score Lee from third. After a sacrifice bunt moved the runners up a base, Tim Swatek connected for a sacrifice fly to center, scoring Walker.

Fordham extended the lead to 4-0 in the third, as Lee hit his second home run of the season, a solo shot to right.

The Rams added two more in the fourth for a 6-0 lead on a fielder’s choice by Stephen McSherry and an RBI-double by Ryan Maghini.

St. Bonaventure finally got to Pike in the sixth, as pinch hitter Joe Chittester drilled a solo home run to right, for his first round-tripper of the season.

Fordham responded with three runs in the eighth, highlighted by a two-run single by McSherry to seal off a 9-1 win for Fordham.

Pike improved to 4-1 on the season, giving up one run on six hits with eight strikeouts, while Jonathan Reich pitched a scoreless ninth.

At the plate, McSherry was 1-for-4 with three RBI, while Walker was 2-for-4 and a RBI with Swatek and Lee each scoring a pair of runs.

The Fordham baseball team will next be in action on Tuesday, April 12th, when the Rams host the Rutgers Scarlet Knights at Houlihan Park, beginning at 3:30 p.m. 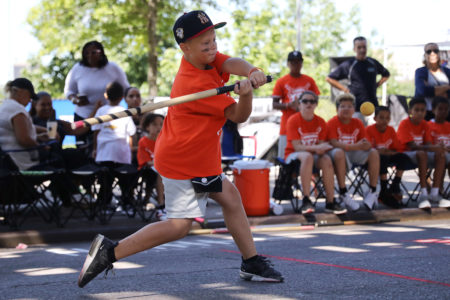