The award money ($328,000) will be disbursed by the Office of the Bronx Borough President to local non-profits, who will conduct targeted “MAKE THE BRONX COUNT” Census outreach in communities throughout the Borough before the September 30 federal deadline. The 2020 Census can be filled out at my2020Census.gov.

Local non-profits will use the grant money to conduct strategic Census outreach, such as pop-up enrollment sites, phone/text banking operations and social media campaigns, throughout The Bronx.

As part of his efforts to get the word out, Borough President Diaz, Jr. will be partnering up with New York State Senator Alessandra Biaggi and Manhattan Borough President Gale Brewer, on Thursday, September 10, 2020, for a “Census 2020 Battle of the Boroughs” phone-banking competition, with the goal of encouraging our residents to be counted by responding to the Census.

To volunteer in the “Census 2020 Battle of the Boroughs” and represent your borough, ease visit here. 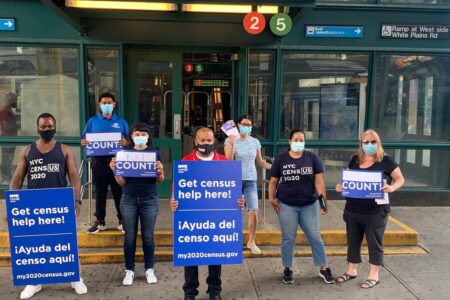