A Bronx man was indicted on Saturday on charges that he robbed an 88-year-old man of $1,000 that the senior citizen had won at Resorts World Casino at Aqueduct Racetrack in South Ozone Park, according to Queens District Attorney Richard Brown.

Brown, in court documents, alleges that Hillman had followed Kuan Yao, 88, home after noticing the senior citizen won $1,000 while betting at the casino on October 31, 2014.

Surveillance videos from the casino show Hillman walking in “close proximity behind” Yao, who was counting his winnings while exiting the casino.

Yao, according to court documents, boarded a Resorts World Casino shuttle bus and was followed by Hillman, who also boarded the shuttle.

A few minutes later, Hillman allegedly wrestled Yao to the ground “causing him to hit the cement sidewalk, causing contusions and welts and a bump on his forehead and face and scratches to his hands and after his head hit the sidewalk he blacked out,” according to court documents.

While Yao was on the ground, Hillman allegedly took his wallet, which contained about $1,010 and a Capital One credit card, according to court documents.

“Hillman now faces the possibility of a lengthy prison sentence,” Brown said in a written statement.

Hillman was arraigned on the charges on Nov. 8, a district attorney spokesman said in an email, and is due back in court on November 21, 2014. 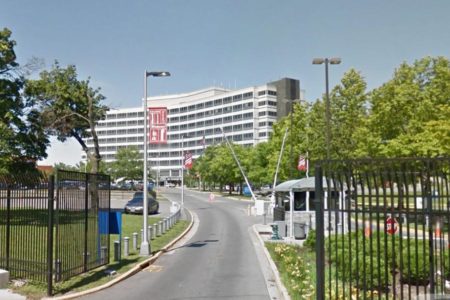