In addition, miles of new storm sewers that did not exist when Hurricane Sandy flooded the neighborhoods will make both communities more resilient to future storms. In total these infrastructure upgrades amount to an approximately $100 million dollar investment. The work, which is currently in design, is being funded by DEP and DOT and constructed by DDC.

“In many parts of our city, development far outpaced the construction of critical infrastructure like storm sewers – and as residents in these communities can tell you – when it rains hard, flooding is a real concern,” said DEP Commissioner Strickland. “We are happy to join Council Member Oddo to announce that relief is on the way. When these projects are complete, the miles of new storm sewers and reconstructed roadways will help alleviate flooding when it rains, and also help the neighborhood recover more quickly if we ever face another event like Sandy.”

“To create a safer, more resilient city, we are rebuilding Staten Island’s streets from the ground up,” said DOT Commissioner Sadik-Khan. “Shoring up some of the borough’s most vulnerable roads will help protect residents and ensure that the infrastructure is there-and particularly when Staten Islanders need it most.”

“We look forward to helping build miles of storm and sanitary sewers, water mains, and roadways in South Beach and New Dorp Beach, communities that were so hard-hit by Sandy. These City projects will improve our streets, water service, and drainage during future storms,” said David J. Burney, FAIA, Commissioner of the New York City Department of Design and Construction.

“The Bloomberg Administration made a commitment to me months ago that they would objectively and fairly assess out request to ensure these projects would be fully funded and allowed to proceed” said Council Member Oddo. “Today fulfills that compact and I am grateful, particularly to Deputy Mayor Cas Holloway, who made this happen. The people in these areas of South Beach and New Dorp Beach should not have to live in fear of the weather forecast and endless ponding and flooding in front of their homes. I know it has taken too long, but help is really on the way.”

In the South Beach Area, defined by McClean Avenue to the North, Olympia Boulevard to the South and Hickory Avenue and Quintard Street to the East and West:

“Millions of New Yorkers depend upon the City’s infrastructure systems. The process of upgrading and protecting these systems from the impacts of extreme weather and climate change is a key part of the City’s multi-layered resiliency plan,” said Daniel Zarrilli, the City’s Director of Resiliency. “Improving drainage and roadway infrastructure has been a clear priority for the communities of New Dorp Beach and South Beach and these projects are helping to build a stronger, more resilient New York.”

“This is tremendous news for these communities. Anyone who is familiar with South Beach and New Dorp Beach can tell you that almost any rainstorm meant flooding for those neighborhoods,” said Councilman-Elect Matteo. “Getting these sewer projects financed and on the books will be a huge win for the quality-of-life of the people residing there. I want to thank DEP Commissioner Carter Strickland, Deputy Mayor Cas Holloway and the Administration for making these projects a priority.”

In the New Dorp Beach Area, defined by New Dorp Lane to the North, Ebbitts Street to the South, Milton Avenue to the West, and Cedar Grove Avenue to the East:

DEP manages New York City’s water supply, providing more than one billion gallons of water each day to more than nine million residents, including eight million in New York City. The water is delivered from a watershed that extends more than 125 miles from the city, comprising 19 reservoirs and three controlled lakes. Approximately 7,000 miles of water mains, tunnels and aqueducts bring water to homes and businesses throughout the five boroughs, and 7,500 miles of sewer lines and 96 pump stations take wastewater to 14 in-city treatment plants. DEP has nearly 6,000 employees, including almost 1,000 in the upstate watershed.  In addition, DEP has a robust capital program, with a planned $14 billion in investments over the next 10 years that will create up to 3,000 construction-related jobs per year.  This capital program is responsible for critical projects like City Water Tunnel No. 3; the Staten Island Bluebelt program, an ecologically sound and cost-effective stormwater management system; the city’s Watershed Protection Program, which protects sensitive lands upstate near the city’s reservoirs in order to maintain their high water quality; and the installation of more than 820,000 Automated Meter Reading devices, which will allow customers to track their daily water use, more easily manage their accounts and be alerted to potential leaks on their properties. For more information, please visit here. 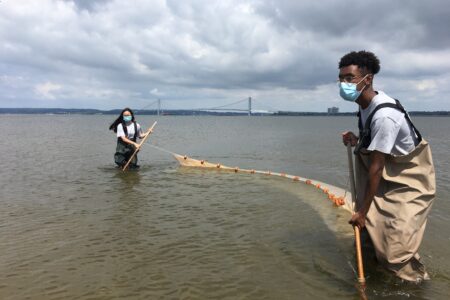 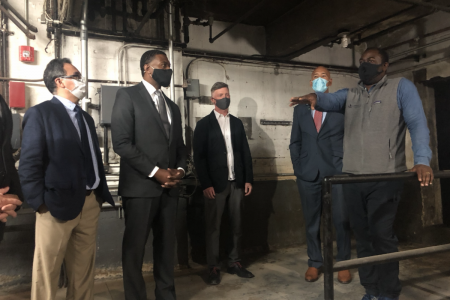