This group of acquisitions is the latest in New York City’s ongoing efforts to protect the upstate watershed and maintain the outstanding quality of the city’s drinking water. A total of 19 easements and parcels of land were acquired, ranging in size from 5.3 to 288 acres. The properties are located in Delaware, Greene, Schoharie, and Ulster counties.

Between 1997 and 2011, nearly 1,400 landowners have signed purchase contracts to sell 120,000 acres of land or easements at fair market value in the Catskill/Delaware and Croton watershed systems—up from  approximately 42,000 in 2002. Prior to the start of the land acquisition program in 1997, the city already owned another 44,600 acres surrounding its reservoirs. New York State also owns and protects more than 200,000 acres of watershed lands. Most of the properties acquired outright will be opened for public access, including hunting, hiking and fishing, as well as economic activities like hay cropping that help local community businesses. The city also protects land by purchasing conservation easements, including easements on farms through initiatives like the Watershed Agricultural Council, a non-profit organization that works with farmers to implement farming practices that are compatible with the city’s watershed protection goals. The Land Acquisition Program in the city’s watershed helps provide safe drinking water to more than nine million New Yorkers, including one million upstate residents in Ulster, Orange, Putnam and Westchester counties.

“The Land Acquisition Program has proven time and time again its worth in keeping our drinking water clean and unfiltered,” said Deputy Commissioner Rush. “More than 120,000 acres have been purchased since 1997 so that every time New Yorkers turn on the tap, they get the absolutely best and most refreshing glass of water. And protecting NYC Water does not come at the expense of upstate communities since we support as many local recreational, agricultural and business opportunities as possible.”

Watershed protection is widely considered the best way of maintaining the quality of drinking water in the long term. New York City’s program, one of the most comprehensive in the world, has been so successful at protecting the integrity of New York City’s water supply that the United States Environmental Protection Agency awarded the city a 10-year Filtration Avoidance Determination (FAD) in 2007. Since the beginning of the FAD, New York City has committed $541 million to purchase land to protect its unfiltered drinking water which supplies roughly half the population of New York State. The 2007 FAD requires the city to continue an active Land Acquisition Program, focusing on properties selected for their water quality protection benefits. The city only acquires land and easements from willing sellers, and pays fair market value based on independent appraisals. DEP has made unprecedented efforts to balance water quality preservation with the interests and economic vitality of watershed communities, and has agreed to avoid acquisitions in and around existing hamlets where towns have designated such properties as important for their future growth. The success of New York City’s Watershed Protection Program is one of the main reasons why New York City remains one of only five large cities in the United States that are not required to filter its drinking water. The other cities are Boston, Portland, San Francisco and Seattle.

The Land Acquisition Program is governed by a Water Supply Permit, which was extended for 15 years by the New York State Department of Environmental Conservation in 2010. The new Water Supply Permit issued by DEC will allow the city to continue to acquire additional properties and conservation easements to ensure that the undeveloped, environmentally-sensitive watershed lands in the watershed remain protected. In 2010, almost 12,000 acres were signed to contract by DEP, making it the most successful year for signing contracts since the Land Acquisition Program started in 1997.

The city’s watershed Land Acquisition Program is part of Strategy 2011-2014, a far-reaching strategic plan that lays out 100 distinct initiatives to make DEP the safest, most efficient, cost-effective, and transparent water utility in the nation. The new plan, the product of nearly one year of analysis and outreach, builds on PlaNYC, Mayor Bloomberg’s sustainability blueprint for New York City. The plan is available on DEP’s website here.

DEP manages the city’s water supply, providing more than one billion gallons of water each day to more than nine million residents, including eight million in New York City, and residents of Ulster, Orange, Putnam and Westchester counties. Approximately 1,000 DEP employees live and work in the watershed communities.

Construction Of A Bronx Filtration Plant 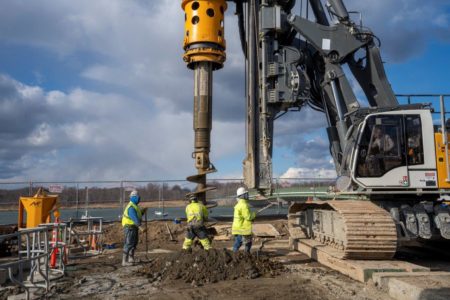