Home / News / Politics / For Now, I Will Defer To Viverito

You should know that a lot has happened since the morning of Thursday, June 19, 2014, when I sent out a press release titled: “Senator Rev. Rubén Díaz, NY Hispanic Clergy Organization, and Members of the Community Are Disgusted by Recent Firings at El Diario la Prensa.”

For example, on Thursday afternoon, I was happy to see that the NY Guild at El Diaro posted the following tweet:

NYGuild at El Diario @eldiarionyguild
@revrubendiaz we look forward to working together to hold @eldiariony
accountable for their racism and degradation of quality journalism
06/19/14, 1:32 p.m.

On Thursday, I was very happy to receive a phone call from Ms. Nastaran Mohit from the Newspaper Guild of New York, asking to meet. This was good news, especially since Assemblyman José Rivera and I were planning to hold a mass demonstration outside of El Diario la Prensa’s executive offices on June 26, 2014.

You should know that except for Angelo Falcon, the President of the National Institute for Latino Policy, I was one of the first one to come out publicly to oppose offensive remarks by the new owners of El Diario la Prensa after they called the largest and oldest Spanish-language newspaper n New York City and it’s readership “ghetto.” I was also the first one to take a position against the unexpected and unjust firing of many seasoned journalists at El Diario la Prensa – and I was quite willing to offer my help to a union representative.

Ms. Nastaran Mohit thanked me for my support and requested that we meet during the next day to see how we could work together to demand justice for El Diario la Prensa’s fired journalists and their readership. On Friday, June 20th, she contacted me to reschedule since an emergency meeting had been called by the CEO of El Diaro’s parent company, Francisco Seghezzo. Even though we agreed to meet on Friday evening, I not heard back from Ms. Nastaran Mohit.

Since Friday, I did hear from several people – including my dear friend and former El Diario la Prensa columnist, Gerson Borrero – that some leaders in New York’s Hispanic community – in particular the New York City Council Speaker Melissa Mark-Viverito – do not want me involved in this fight.

Gerson Borrero @GersonBorrero
Source says @MMViverito to get involved in @eldiario dispute.
She doesn’t want @revrubendiaz involved even though he took lead in issue
06/21/14, 12:53 p.m.

You should know that in my capacity as a minister and as an elected official, I have always been there to fight for the rice and beans for the families in my community. My record shows that I am on the front lines fighting for housing, for senior citizens, for education for our children, for the poor and needy, for respect for our community, and so on.

Apparently, my unwavering positions to protect all human life and oppose abortion, and to support traditional marriage and oppose gay marriage are the reasons that New York Council Speaker Mark-Viverito does not want me involved.

My dear reader, I do not want anyone to think for a moment that I am turning my back on our community who have been insulted by racist statements about Puerto Ricans and Dominicans by the new owners at El Diario la Prensa, nor that I am turning my back on the workers who were unjustly fired by El Diario la Prensa. Instead of rejecting what might seem to be her censorship of me, I am going to defer to the wishes of the Speaker Mark-Viverito and this time, I am going to step out of the ring. I will pull back and cancel any planned protest outside of the offices of El Diario la Prensa. I will cease and desist any efforts to involve myself in this public arena, and I will completely defer to Council Speaker Mark-Viverito to handle this matter.

You should know that since one of Council Speaker Melissa Mark-Viverito’s senior advisors is Erica Gonzalez, El Diaro la Prensa’s former Executive Editor, I am confident that the Speaker will have all pertinent information accessible to her and be able to handle everything since her advisor knows all parties involved.

Ladies and gentlemen, I will step aside and believe that with the intervention of New York City Council Speaker Melissa Mark-Viverito and her troops, El Diario la Prensa’s workers will be protected, and our community will receive the apology from the new owner that we all deserve.

But if I feel that the community and the workers are not being protected, and if we receive no apology, rest assured: I will be back. 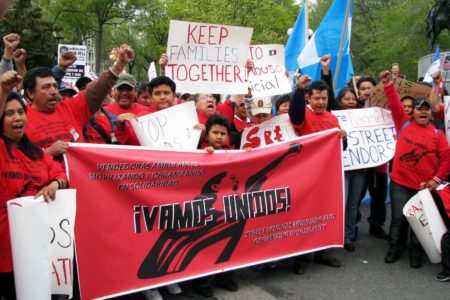