Standing in front of the Ocelot Apartments in the Bronx and joined by tenants and local community leaders, U.S. Senator Charles E. Schumer today called on Fannie Mae to ensure that whoever buys the dangerously deteriorated buildings commit to repairing the apartments and keeping the buildings affordable. Ocelot Apartments in the Crotona section of the Bronx were abandoned by their owners after they could no longer afford the highly overpriced mortgage they took out on the property. 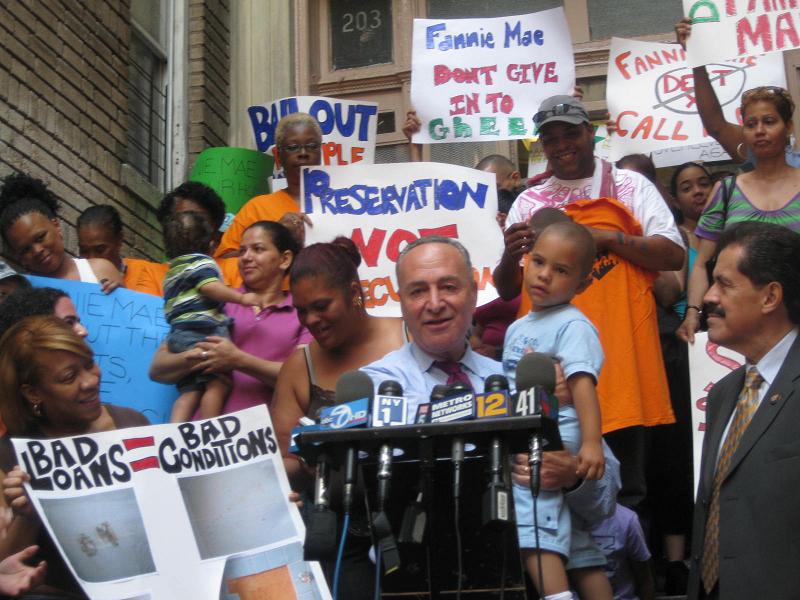 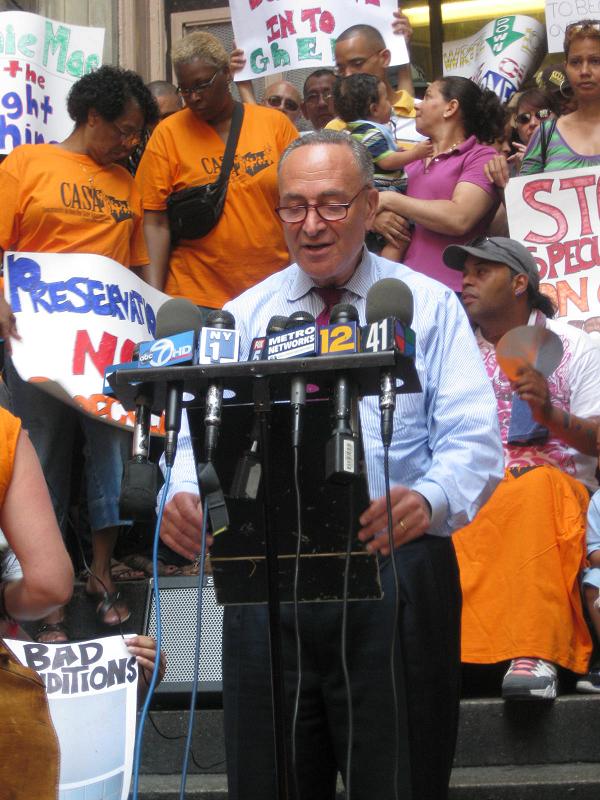 The owners employed a scam called “predatory equity” where the buyer works out an arrangement with a major bank or lender to take out an overpriced mortgage on the assumption that the new owner will be able to significantly increase rents. In the case of Ocelot, the owners simply abandoned the building more than a year ago, leaving the tenant to live in a building that has deteriorated in to dangerous conditions.

“The bottom line here is Fannie Mae needs to work with us to find a way out of this mess.  Allowing these buildings to be horse-traded on the open market is a sure fire way to guarantee that another speculator gobbles them up, and either continues to let the building rot or kick the current tenants out on to the street. We simply cannot allow that to happen. There is a clear path forward for Fannie Mae to work with the City to put in place a preservation buyer that will fix the place up and keep it affordable and I strongly urge Fannie Mae to take it.”

“I will not allow families in my district to be preyed on by real-estate speculators,” said Congressman Serrano. “Fannie Mae must step up and do what is needed to protect the future health and safety of these tenants.”

“The Ocelot Portfolio is a prime example of the damage that the predatory equity crisis is doing to affordable housing across our city,” said Speaker Christine C. Quinn.  “These buildings are in dire need of repair, but that won’t happen if Fannie Mae sells these properties to the highest bidder.  Residents need a landlord who will maintain the property, not someone who will look to maximize profits at the expense of residents’ safety.”

The owner of the buildings on East 178th Street is a real estate investment company called Ocelot Capital Group. Ten of Ocelot’s 25 properties in the Bronx were placed on the city’s worst buildings list in 2007 and 2008, racking up 5,000 serious and immediately hazardous housing maintenance code violations.

Fannie Mae, the government-controlled mortgage-finance company, bought the loans Deutsche Bank Berkshire Mortgage made to Ocelot for 18 of Ocelot’s 25 buildings, totaling $29 million from 2006 to 2007. Fannie Mae has now acknowledged that the loans did not meet their underwriting standards at the time of origination.

Fannie Mae bought the $29 million mortgage portfolio from Deutsche Bank in 2007 while the buildings were already in a state of decline. Advocates are pressing the Government Sponsored Entity to find an alternative strategy for the buildings; one that will ensure that units are rehabilitated, affordability is preserved, and that tenants’ suffering comes to an end.

The rent-regulated buildings are home to more than 300 low and moderate income families located in several neighborhoods throughout the Bronx.

Despite the appalling conditions in all the buildings, Fannie Mae is now considering auctioning the Ocelot mortgages through a website called DebtX—an eBay-type service that deals exclusively in the sale of distressed mortgages. The auction could encourage speculative buyers to over-pay for the properties and hinder any effort to repair and re-stabilize the severely troubled apartment complexes.

Schumer called on Fannie Mae, the current holder of the mortgage to instead of selling the property to the highest bidder, rather negotiate with New York City and sell the endangered buildings to a preservation buyer who will fix up the building and ensure it stays affordable. 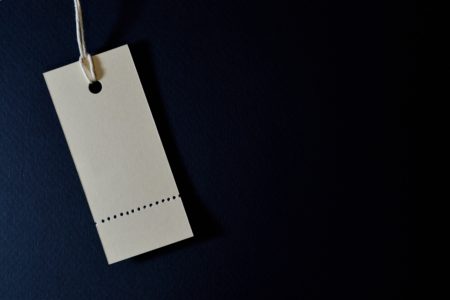