Councilman Eric Gioia (D, Queens) released the following statement upon receiving the news that State Senator Hiram Monserrate has been found guilty of a misdemeanor assault:

“There is no room in government or in the Democratic Party for people who commit such heinous crimes against women. Hiram Monserrate must be swiftly removed from office. Elected officials should rightfully be held to a higher standard, and New Yorkers living in Corona, Elmhurst, East Elmhurst and Jackson Heights deserve better representation than a convicted perpetrator of domestic violence. As a father of two daughters, I was appalled by the circumstances revealed in the trial, which truly shock the conscience. I commend the Queens District Attorney’s office for their hard work.”

Monserrate was arrested on December 19, 2008 and accused of slashing Karla Giraldo in the face with a broken drinking glass during an argument in his Jackson Heights apartment. He was arraigned the same day and pled not guilty to the charges of second-degree assault, a felony that carries a maximum sentence of seven years in prison, and fourth-degree criminal possession of a weapon. If Monserrate is convicted, he will automatically be expelled from the Senate.

His companion initially made statements to hospital staff and the police which led to his arrest. She later changed her account to match that of Monserrate namely that the cuts on her face near her left eye from a broken glass were an accident and she is no longer cooperating with the investigation.

Sources have discussed with the media evidence including video surveillance that support the charges of assault and the attempt to cover it up.

On February 27, 2009, the order of protection which prevents Monserrate from having contact with Giraldo was extended over the objections of Monserrate’s attorney.

On March 23, 2009, a Queens grand jury indicted Monserrate on three counts of felony assault on Giraldo and three counts of misdemeanor assault. If convicted, the maximum sentence would be seven years. Monserrate denied the charges, saying “Listen, the reality is that from the very beginning I have said this was an accident. My girlfriend said it’s an accident. This is an accident and we look forward to the dismissal of all these charges based on the truth.”

The charges were not dismissed and proceeded to trial where Monserrate waived his right to a jury on September 18, 2009.[35] As his trial started, the security camera videotape described above was entered in evidence and made public. It shows his girlfriend screaming and clutching at doorways as he forces her outside.

On, October 15, 2009, Monserrate was acquitted on the second-degree assault felony accounts, convicted on a third-degree assault misdemeanor count, and therefore will retain his seat in the New York State Senate. 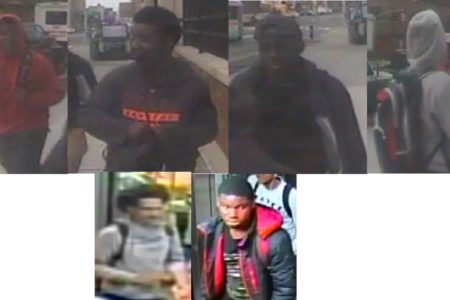