The following eyewitness account was submitted by Robert Dressler. A total of 4 images (inside) paint a picture of a man’s arrest. 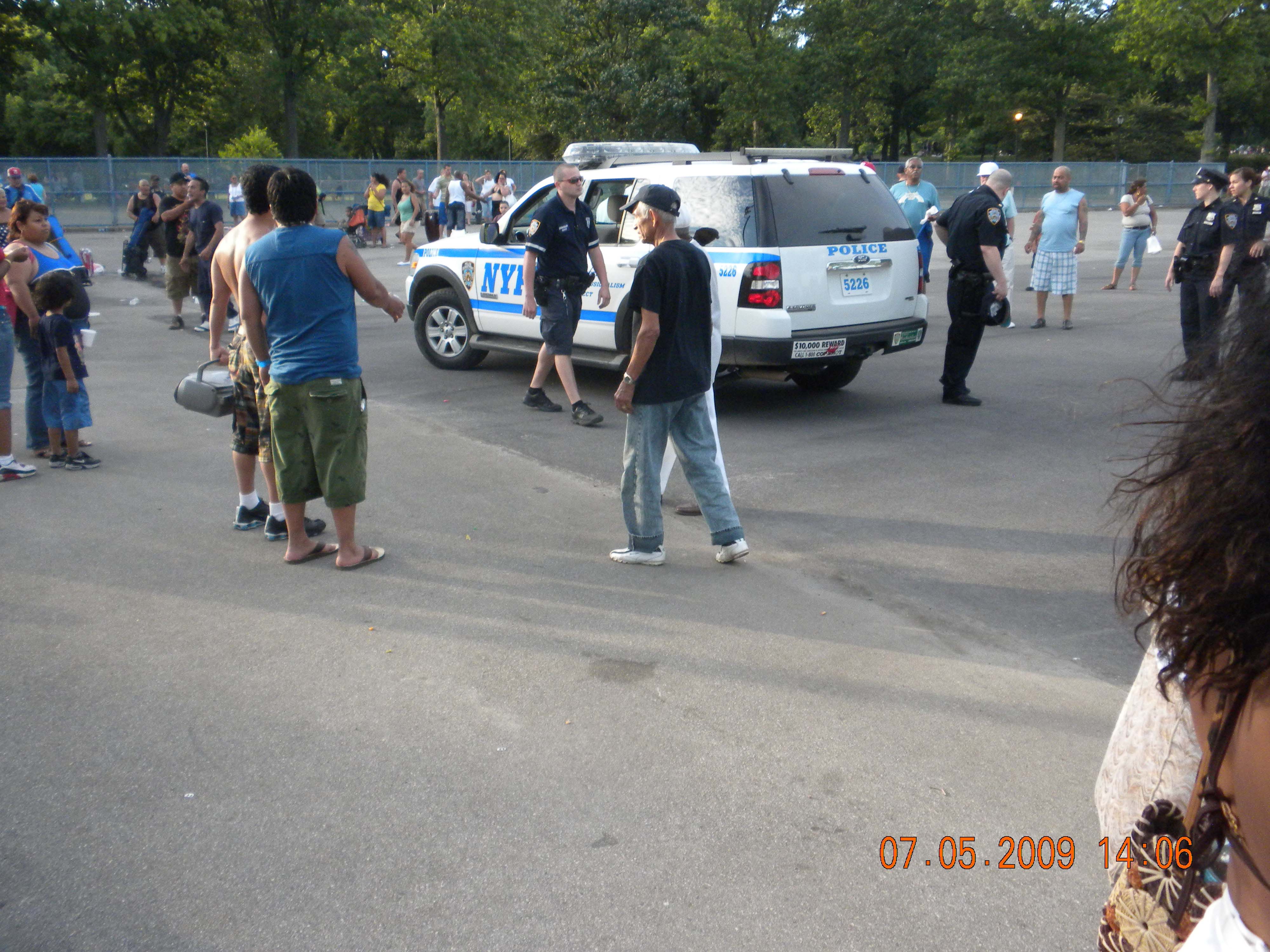 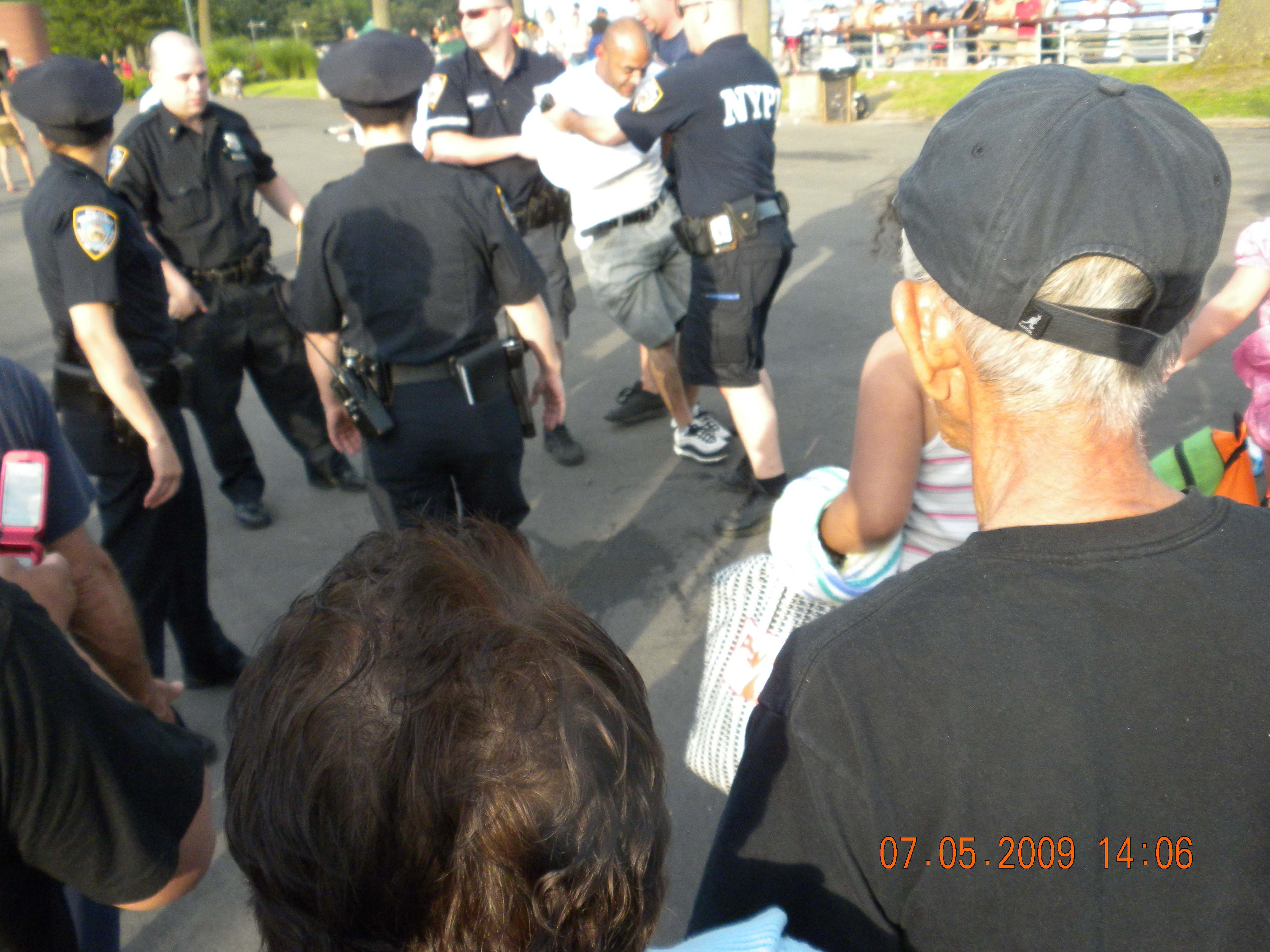 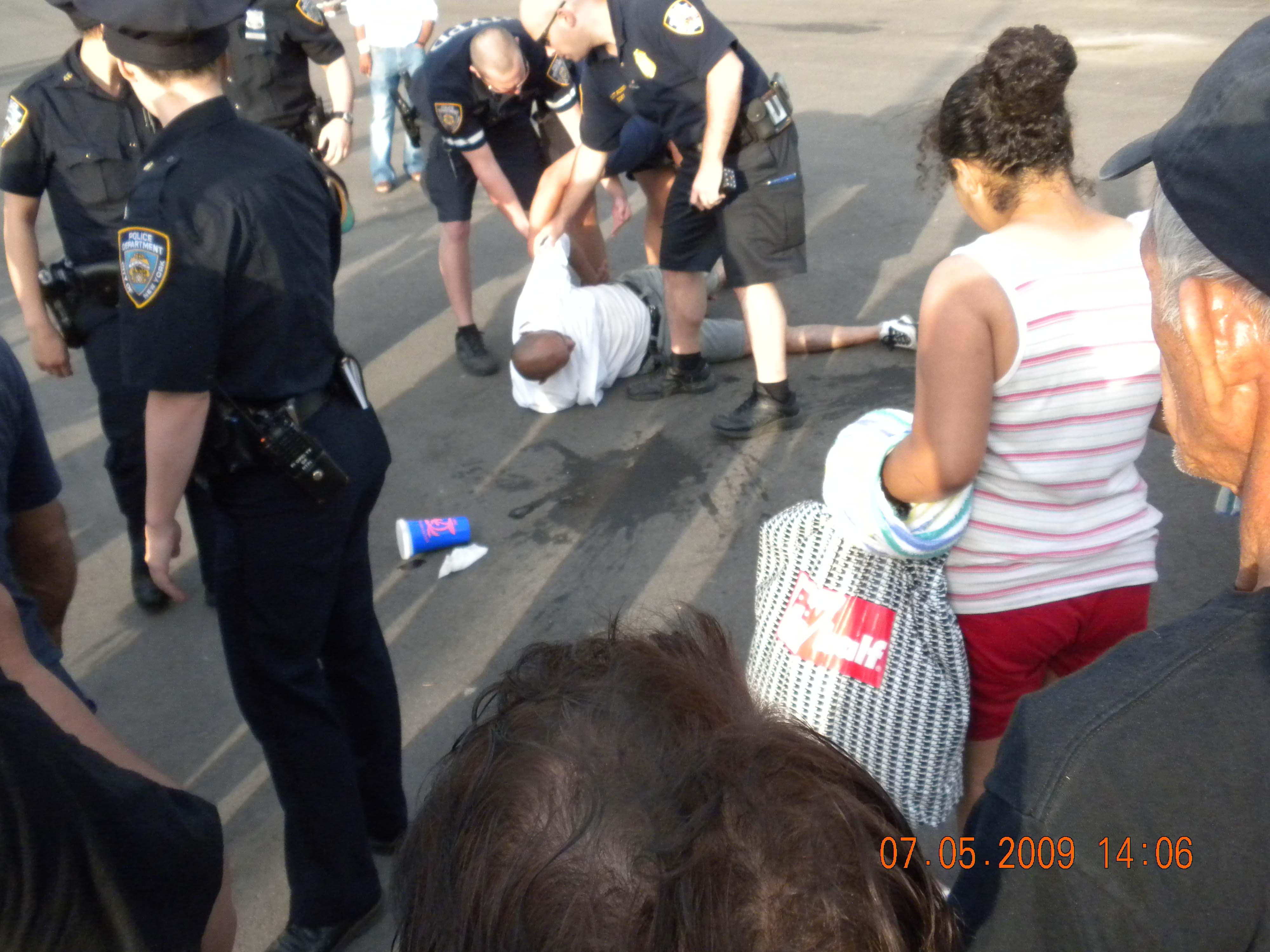 “It seemed to me that it was all-unnecessary. The police patrol SUV abruptly came on to a park area where about 75 people had gathered listening and dancing to the tunes of salsa, where everything was festive and happy. No one was combative only musical souls with some drummers, a boom box, and some dancers all rejoicing for the Fourth of July holiday.

The sign on the NYPD patrol cars advertises professionalism, courtesy and respect. At this point and time, those words were no more than a Madison Avenue advertising lie.

The ear-piercing sounding siren kept playing over and over. Finally, in all fairness, a speaker sound from the police patrol car announced that Orchard Beach was closed.

I had not realized how beautiful this entire area was until I started walking into Orchard Beach from paths different than the usual parking lot. City Island nearby advertises the seaport of the Bronx. Puertorican families and many Dominicans plus a mixture of all ethnic groups with their children, on a family outing, come to the park and beach to barbeque, sun bathe, be festive, dance and listen to music, even do some swimming.

Orchard Beach is like a military compound in the Summer and it seems the place is infiltrated with hundreds of uniform and undercover police officers with stacks of books stuffed into their side pants pockets to give out the summonses for small infractions of not walking in the right place or possibly annoying people, or drinking beer in the wrong section with the wrong kind of cup.

I have been going to Orchard Beach for many years and I am a light skinned Gringo that loves the spirit of these beautiful Caribbean people who I believe are totally misunderstood by most of America; especially some of our police officers.

I am a law and order guy and respect most of the hard working life-risking police officers who diligently do their duty and service for the USA in every city. When I see so many of them who do risk their lives, I think and tell them they deserve purple hearts for their efforts. However this is not true for a few of them, who seem to carry a chip on their shoulder and at times remind me of adolescent gang members. If I am ever stopped for a traffic violation, I apologize to the officer, keep my hands exposed and ask permission to reach for my wallet.

About five or six officers were trying to close the park and have people leave that festive area in a rush. This was done with utmost rudeness, lack of courtesy, disrespect, which naturally resulted in upsetting quite a few people. Everyone was packing up and trying to leave a park that they really should not have to, especially given that it is the weekend of a major national holiday – the Fourth of July.

Why would the Police use such rude methods to antagonize people for something as simple as exiting the park? Were they under direct military orders to empty the park so promptly? Or all of them had to be home on time for dinner? Or maybe they wanted to save additional funds that it would cost to operate the park? After all, the citizens indirectly pay through taxes for the park services, while they get charged 8.00 dollars for parking.

Friends of mine who were very close to the situation and witnessed it in its entirety said a man made a discourteous remark when he walked past the police patrol SUV and was proceeding to walk out of the area. The police officers got behind him on their feet and would not let him go on asking for his ID. In simple terms, the Police came and stirred the field with discourtesy and some people verbally gave it back to them. For the man who made the remark the case was that the police now wanted to make a mountain out of a molehill. The man’s wife was pulling him out of the area but the police officers were blocking him from behind asking for ID. As this was taking place, another officer, who was not even in the conversation, ran from another area and leaped on this guy bringing him down to the concrete ground. The officers participating pushed his face and nose into the dirt as if they wanted to break it (probably what they call standard arresting procedure in manual 1.672). If the man was frail they could have broken his back. Never stating his rights and never telling him he was under arrest the man was not given the opportunity to cooperate. Of course, the man never struggled, he was probably bruised from the fall, cuffed and then they carried him into their SUV. He could not move or stand up or walk. The Police of course in front of so many witnesses would not beat him but they sure did enough to rough him up during his brutal arrest.

The crowd that saw this first hand was furious because the man did nothing to deserve the police abuse he was served with. People started to complain verbally. No one in the crowd rushed in, no one touched a police officer but they continued complaining. Unfortunately no one was able to take badge numbers without risking arrest for being too close. In fact, an old and gray man was arrested because he voiced complaint and told them it was wrong. To arrest a man for a legitimate reason, yes, I am for that, but for the police to stir up the crowd of good people who certainly had seen miscarriage of justice against them before was infuriating.

Does anyone in the police public relations office teach these adolescent officers how to avoid confrontation instead of creating it? I am a student of psychology and human nature and it was clear the Police were motivated to make an arrest over nothing and then to incite the crowd who were all decent people. Maybe they were looking for overtime work, or maybe they were just trying to get across the point that they were doing their job?

As a result of the police actions, instead of getting everyone out of there early to close the park, they accomplished quite the contrary. I can only assume the police officers, in this situation, had no human relationship skills, are adolescent and illiterate, or have devious intentions that appear to be corrupt and biased and prejudiced. Why would they try to break this mans back and nose, injure him, throw him to the ground when the four officers could have cuffed him while he was standing erect? If they asked him to put his hands behind his back, which they never did, he would have probably complied. Why did the police officer who came out of nowhere (with a full head of black hair, tall and strong) jumped the poor man? I could never know. The actions described defy the painted motto on the side of NYPD’s patrol cars.

After infuriating the crowd, the police had to call for back up officers from the other side of the park. Perhaps we should have all gotten on our knees, put our hands behind our backs and chanted “arrest us all, arrest us all”.

I can probably come up with more than a dozen witnesses who were close up. I would love to know the name of the officer who brought this guy down on the concrete so hard. I would love to see the police report on the arrest, since there were so many eye witnesses and we would love to see how the code of silence of the other officers protected the one who brought this man down for what was by all means a minor misdemeanor. How in the world does a police manual show an arrest by leaping on top of the guy like playing football on concrete? Is this the new police manual instruction for arrest? Tackle the guy like you try to bring down a quarter back. The whole weight of this police tackler was on him and now the leaper can claim this was not police brutality. Most officers would have let this guy go but one did not and the crowd was stirred with anger because it was plain wrong.

If the police department is going to send officers to do duty at Orchard Beach they should train them to understand the culture and have respect for that culture and those people. They could have done their entire mission in a gentle courteous manner eliciting the cooperation of the people and everyone would have been out of their a half an hour earlier. This incident could have blown up to much more.

Who are some of these aliens who come to work a beach area on the weekend of the independence of our country where great men risked life and limb to make a cry for freedom? The Police violated this man rights and that police department and that officer took our great declaration and turned it to no more than toilet paper.

This was wrong and we have witnesses that can confirm it was wrong and for the benefit of the public relations department of our city and police department – do not send officers to an area where they really want to incite a riot rather than prevent one.

We want to know what happened in this arrest and what was the fate of the man arrested, who may have a broken nose or a broken back, and also to hear his side of the story. I think the Police have some answering to do for this community and the involved officers should get training in prevention for an ounce of prevention is worth a pound of cure.

Stop sending officers with improper training and attitude to Orchard Beach because it damages the image of the majority of those brave police officers who do such great things for our country.

For the management and command of police procedure, I can only insinuate that there were hidden motives to make a scene out of nothing. This behaviour and the underlying motivation seem to be far more reaching than one can imagine.

If this was racially motivated, then we have not advanced in racial relationships. What we have here is a military organization defying civil rights and after I have seen what I have been witness to someone at the top maybe issuing orders to come down on these folks very hard. I am trying to defend the rights of citizens to be free of police abuse, hence this letter. Please teach your officers to avoid confrontation, not create it, and to try and be polite.” 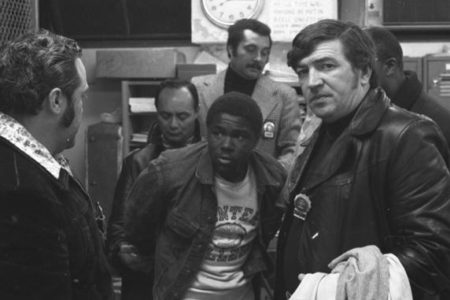