A series of horrific car bombings in Baghdad on 10.08.2013 had reportedly left more than 80 dead and many more injured. The attacks appeared to target festivities marking the end of Ramadan in Shi’ite neighborhoods, which prompted comment from State Department spokeswoman Jen Psaki, who said in an official statement:

“The United States condemns in the strongest possible terms the cowardly attacks today in Baghdad. These attacks were aimed at families celebrating the Eid al-Fitr holiday that marks the end of the Muslim holy month of Ramadan. The terrorists who committed these acts are enemies of Islam and a shared enemy of the United States, Iraq, and the international community.” (HT: Alim Haider)

As horrific as these bombings are, obviously fueled by sectarian differences, it’s troubling to see that the Obama administration has now put the U.S. government in the business of denouncing “enemies of Islam.”

The first reason this development is troubling is the blinding hypocrisy and deliberate selectivity of it all.

Mind you, this is the administration that branded the MuslimBrotherhood a “largely secular” organization. It has taken every effort to purge government national-security documents of any reference tying terrorism to Islam while Janet Napolitano’s Department of Homeland Securityproscribed training by anyone declaring themselves “Muslim reformers” (while at the same time government contractors tie pro-life, pro-Second Amendment, and Tea Party views to “violent extremism”).

Any government employees that observe that Islamic terrorists themselves wrap themselves in the mantle of doctrinal Islam will quickly find themselves without a job. And when members of Congress have confronted senior administration officials as to whether elements of radical Islam have declared war on the U.S., those officials have angrily protested that Congress merely asking such questions puts them in league with al-Qaeda.

Then there’s the constitutional problem. The Establishment Clause of the First Amendment requires the U.S. government to remain agnostic on these sorts of questions. It’s doubtful that Jen Psaki is going to be denouncing respective sides in Northern Ireland as “enemies of Christ,” especially when State can’t bring itself to even admit that attacks on Christians by Islamic groups are religiously motivated.

The administration has some serious problems in this regard. If the NYPD showing the documentary The Third Jihad to police officers is a grave constitutional crime, then so too should be the Department of Justice Civil Right Division screening Inside Islam: What a Billion Muslims Really Think for their employees on government time (not to mention the chutzpah of anyone claiming to know “what a billion Muslims really think”).

In fact, there only seems to be one religion that gets this preferential treatment. DOJ is not meeting with Jewish groups to discuss using discrimination laws to criminalize defamation of Judaism. Government prosecutors aren’t imprisoning filmmakers for unflattering portrayals of the Buddha. And Hillary Clinton didn’t travel overseas and promise to use the full might of the U.S. government to use “old-fashioned techniques of peer pressure and shaming” on critics of Christianity.

If Barack Obama and members of his administration want to grind the Islamic grievance machine on their own time and as private citizens, they are perfectly entitled to do so. But when he goes before the United Nations as president of the United States and declares that “the future must not belong to those who slander the prophet of Islam,” he has crossed a line expressly prohibited to him by the very Constitution he swore to uphold.

Where is the outrage from the Left or the ACLU? Where are members of Congress on this? For many Americans, our ancestors left their homelands to escape governments getting involved in sectarian feuds. The First Amendment’s Establishment and Free Exercise Clauses ensured that despite the natural temptations to do so, the U.S. government wouldn’t go down that road. But now that it is, it’s past time for Americans to take notice and take action.

Patrick Poole is a national security and terrorism correspondent for PJMedia. 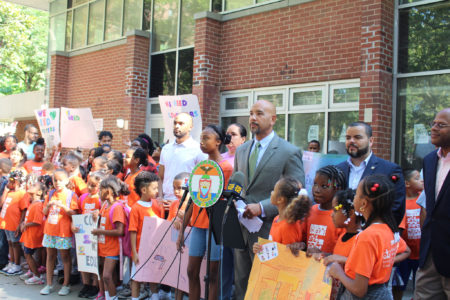