The Metropolitan Transportation Authority (MTA) today released its preliminary 2021 budget and four-year financial plan, detailing a deficit of $16.2 billion by 2024. The MTA is projecting deficits of $3.2 billion for 2020 and $5.8 billion for 2021. As the pandemic subsides and riders return, the MTA projects that the deficit for 2022 will fall to $3.5 billion for 2022 before settling into a range of $1.8 billion to $2 billion for the following two years.

To help solve the enormous coronavirus deficit, the MTA is undertaking the largest cost cutting program in its history. The MTA has initially identified $1 billion in savings in 2021 with a focus on dramatically reducing overtime, consultant contracts and non-labor expenses. Through 2024, the MTA has identified $5.13 billion in-house savings through aggressive budget reduction efforts. This effort is ongoing.   As the U.S. Senate considers the next coronavirus relief package in Washington, the MTA is urgently requesting $3.9 billion to get the agency through the end of the year and a total of $10.3 billion through 2021. The MTA will exhaust all federal funding previously secured in the CARES Act this month. The budget crisis marks the most challenging in the agency’s 52-year history as the COVID-19 pandemic has decimated revenue across all services and generated increased costs for cleaning and disinfecting.

“To say that these challenges are existential in scope isn’t an exaggeration,” said MTA Chairman and CEO Patrick J. Foye. “Without further substantial assistance from the federal government, anything and everything must be on the table with respect to responding to financial damage from the pandemic. We are the lifeblood of the region’s economy and the fallout from Washington’s failure to act would have national consequences.”

“The fiscal reality of what we are facing is very clear and very dire,” said MTA Chief Financial Officer Bob Foran. “Without an infusion of billions of dollars in desperately needed federal funds, the MTA simply cannot provide customers with existing levels of service at the current fare cost. Not getting Federal support is not an option for the long-term health of the regional and national economy.”

As part of the preliminary 2021 budget, the MTA also released updated forecasts of fare and toll revenues and tax subsidies impacted by COVID-19. Compared with initial ridership projections in April by McKinsey, subway ridership is rebounding in line with expectations while bus ridership has risen faster than expected, though with fare collection being extremely limited due to rear-door boarding. Toll traffic rose earlier and faster due than expected but might be reaching a plateau.

Early real estate indicators show a sharper drop in real estate tax revenues than predicted, while taxes related to mobility, such as a petroleum business tax, have been higher than initially modeled.

As recently as February, just prior to the onset of the pandemic, the MTA had been projecting modest surpluses for 2020 through 2022. This came at a time the MTA was making sustained progress with on-time performance reaching six-year highs of 80.3% on the subway and 94.4% on Metro-North and a three-year high of 92.4% on the LIRR, ridership on subways, LIRR and Metro-North at or near historic highs, and the passage of a historic $51.5 billion capital program.   The MTA has been devastated by the pandemic. The MTA’s 2020 revenue losses are greater than that of more than 30 states, according to a recent survey, and greater than 35 states in 2021. That figure amounts to more than 40% of fare, toll and other revenues over those two years, which makes up approximately half of the Authority’s operating budget. By comparison, the MTA lost roughly 9% of its operating budget during the 2008-2009 peak of the Great Recession.

The MTA’s finances have been further harmed by the Federal government’s failure to specify an environmental review process to allow the MTA to move forward on a landmark Congestion Pricing program that was to take effect in 2021, improving the environment, reducing congestion and providing the financial bedrock for what had been the largest and most ambitious capital program in MTA history. To that end, the awarding of new work in the Capital Program currently remains on hold, except for a tranche of 2015-19 projects that are being accelerated to take advantage of the overnight closure and lower ridership.

Absent the billions in federal funding necessary for ensuring the system can function at pre-COVID levels, all options remain on the table. That includes, but is not limited to, wage freezes, delaying the start of new capital projects and reducing the scope of the historic 2020-2024 Capital Program to modernize the transit system, non-personnel expense reductions, reductions in force, scheduled fare and toll increases, service reductions and long-term deficit financing. Deficit financing would require additional funding to cover the debt service associated with such borrowing.

Trio Arrested For The Murder Of Francisco Rosado, 51 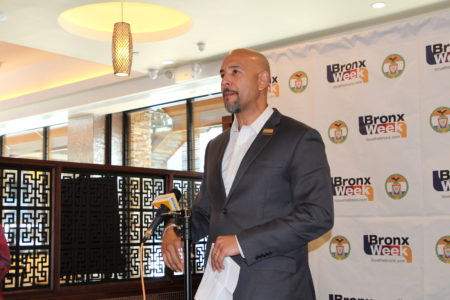