A minivan plowed into a Mobil Mart in Bronx on Sunday, pinning a customer inside between shelves that were pushed together in a freak crash that was captured on video.

Dramatic surveillance video shows a white minivan driving into the store on Grand Concourse, pushing one aisle into another as a man stood in between them. He completely disappears from sight and packages of food topple to the ground.

Seconds later, he emerges, walking but bent over and clutching his body.

Another video shows the cutsomer, 37-year-old Marcus Collado, being treated on the scene by medics, then walking out hugging his family. He was taken to a nearby hospital and is expected to be OK.

The driver, a 65-year-old woman, did not get out of the minivan immediately after the crash, despite being conscious, video shows. Her passengers exit the vehicle and chase away onlookers.

The driver was also taken to the hospital. She wasn’t seriously hurt and is not currently facing charges.

The owner of the store, Nash Kiswani, was still assessing the damage Monday. 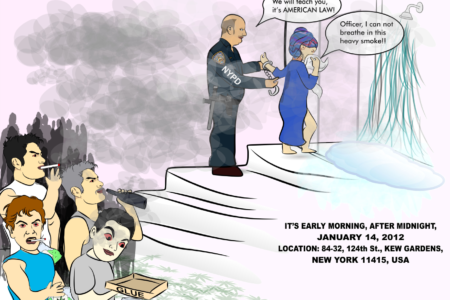