The New York City Police Department is seeking the public’s assistance identifying the following individuals wanted for questioning in connection to a kidnapping incident within the confines of the 40 Precinct in Bronx.

It was reported to the police that on Monday, December 16, 2019, at approximately 2320 hours, a 16-year-old female victim was walking along Eagle Avenue in the vicinity of E . 156 Street, in the company of her 36-year-old mother, when they were approached by a beige-colored four-door sedan which stopped in front of 745 Eagle Avenue. Two unknown males exited the vehicle, grabbed the 16-year-old female, and dragged her inside the vehicle while pushing the victim’s mother to the ground. The vehicle, also occupied by two additional unknown males, then fled east bound on East 156 Street from south bound Eagle Avenue. The mother, left at the scene, was not injured and refused medical attention.

The victim has been identified as follows.

The individuals wanted for questioning are described as four adult males, 20’s, with dark complexions and wearing dark clothing.

A photograph of the kidnapped is attached and available at DCPI.

Surveillance photographs of the suspects’ vehicle are attached and available at DCPI.

The kidnapped has been found and is safe. 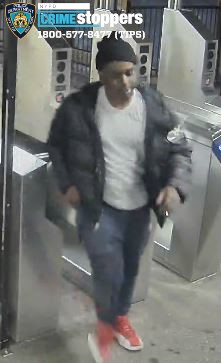