The New York City Police Department is asking for the public’s assistance in ascertaining the whereabouts of the individual, depicted in the attached surveillance photographs and video clip, who is wanted in connection to a homicide, that occurred within the confines of the 44th Precinct in the Bronx.

It was reported to police that on Friday, July 15, 2022, at approximately 2535 hours, at the intersection of Teller Avenue and E. 162 Street, a 31-year-old male was approached by an unknown individual, who engaged him in a verbal dispute.

The individual fled the location eastbound on E. 161st Street.

Upon arrival, officers observed a 31-year-old male in front of 907 Teller Avenue, unconscious and unresponsive, with gunshot wounds to his torso.

EMS responded and transported the aided victim to NYC Health + Hospitals / Lincoln, where he was pronounced deceased.

The individual being sought is described as an adult male in his 30s, Black, approximately 5’08” tall, weighing 200 lbs. 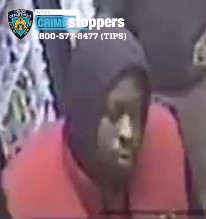