The New York City Police Department is asking the public’s assistance identifying the following individual depicted in the attached surveillance photograph in connection to an assault that occurred within the confines of the 44th Precinct in the Bronx.

It was reported to police that on Saturday, February 29, 2020, at approximately 0440 hours, in front of the “M & S Bargain Hunters” store, located at 56 E. Mount Eden Avenue, a 43-year-old male victim inadvertently bumped into an unknown individual. The two engaged in a verbal dispute, which escalated into a physical encounter. The individual displayed a knife and stabbed the victim multiple times about the body, before fleeing eastbound, on foot, towards the Grand Concourse.

The victim walked to BronxCare Health System, where he has since been treated and released.

He was last seen wearing a black three-quarter length winter jacket with a fur hood, a white shirt with red and black lettering on the front, blue jeans and white sneakers.

Production Of New Line Of Bridge Ventilators For NYC Hospitals 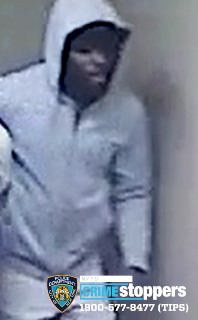 Is Crime Getting Worse In the Bronx… And How Does It Compare To Other U.S. Cities?