The New York Police Department is asking for the public’s assistance in identifying the individual depicted in the attached photographs in connection to a forcible touching incident that occurred within the confines of the 52 Precinct in Bronx / Transit District 11. 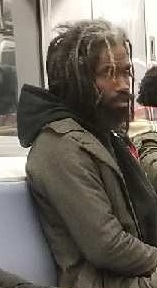 It was reported to police that on December 27, 2018 at approximately 11:24 p.m., a 33-year-old reporter stated that she was riding on the southbound 4 subway sitting down with her 4-year-old daughter, when an unidentified individual entered the subway car at Jerome Avenue and West 183rd Street and sat down on the left side of her daughter. The individual proceeded to put his right hand under her daughter’s buttocks. She confronted the individual about his actions and he stated he was going to shoot her. She proceeded to move down the train car with her daughter and captured the individual with her cell phone. The individual detrained at the Grand Central Station and fled in an unknown direction. There was no weapon displayed.

The individual is described as a male, Black, 6’0″ tall, dreadlocks, beard and medium build. He was last seen wearing green overcoat, gray sweatpants and white sneakers.

Pursuant to an ongoing investigation, the New York Police Department is asking for the public’s assistance in locating the following individual being sought in connection to a forcible touching incident as described above.

Rameek Simmons, 23, Arrested For The Murder Of Robert Forrest, 46