Bronx community leaders are demanding the removal of a vodka billboard with an offensive message, which has been put up near an area once synonymous with prostitution.

Aiming to convey that Wodka vodka is top-notch and cheap, the sign over the Bruckner Expressway in Hunts Point reads: “Escort Quality, Hooker Pricing.”

The analogy did not amuse members of the Bronx’s Community Board 2, who have been battling for a decade to revamp Hunts Points reputation as a place to pick up hookers.

“When I saw it I almost fell out of my seat,” the New York Daily quoted Rafael Salamanca Jr., district manager for CB 2. “That’s an inappropriate billboard given what the Hunts Point community has gone through in the past,” he said.

The creators of the ad stood by it, but said they would be responsive to feedback.

“Listen, if it’s offensive it’s because the topic is offensive to people and we understand that,” said Brian Gordon, managing partner for Wodka’s marketing company, MMG.

Wodka drew fire from the Anti-Defamation League in November with its “Christmas Quality, Hanukkah Pricing” billboard.

CB 2 Chairman Ian Amritt called on the owners of the billboard, Van Wagner, to take down the sign.

“We have reached out to our advertiser to see whether we can remedy the situation,” said a Van Wagner lawyer.

If the owners believe that no advertising is bad advertising, they are right on.

Also, thank God for the freedom of speech. 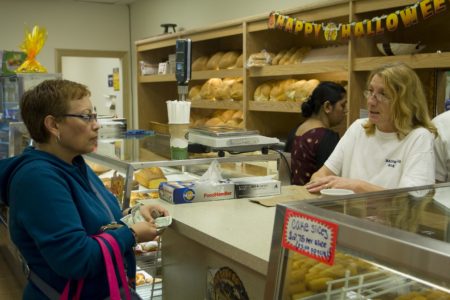 Back In Baked Goods