Duane Carleton had just finished making his first movie — a documentary about the 1986 murder of Manchester golf pro Sarah Hunter titled “Overtaken by Darkness” — when a friend suggested another southern Vermont headline as fodder for a second.

Win-win? Not for the New Yorkers, who found themselves the target of racial taunts and rumors in the stands and on social media.

“Nobody had any facts,” Carleton would learn. “All I heard was speculation and hearsay and conjecture.”

By the time the school principal and coach resigned after facing similar abuse, the filmmaker was splicing together 3 years of interviews and information into a new documentary.

“Divided by Diversity” premiered last August at a sold-out screening in Manchester, recently showed at the Bronx Museum of the Arts and is set to run locally on Thursday at 7 p.m. at Brattleboro’s SIT Graduate Institute, with the free presentation to be followed by a question and answer period.

The movie may tell a Rutland story, but it “reveals many of the modern elements that are contributing to racial tension nationwide,” its maker says — especially at a time when the country is divided over efforts to host Syrian refugees.

“The arguments against the five students and the refugees are the same: ‘You’re not from here, you don’t belong here, you’re taking away something from someone here,'” Carleton says.

“A lot of violence,” one of the students confirms on camera.

“And drugs,” adds a second.

“I was walking to school and I saw a dead body,” says a third.

They go on a full five minutes recalling the deaths of brothers, sisters, cousins and best friends.

Enter MSJ. Back in 1882 when Rutland momentarily surpassed Burlington as Vermont’s most populous city, the Catholic Sisters of St. Joseph established their namesake academy, which housed as many as 600 students in the 1960s. As Rutland dropped from the state’s second-largest community to third in 2000 and fifth in 2010, however, the school saw enrollment dip to 70.

MSJ teachers welcomed the New Yorkers. But when the teenagers started playing on the basketball team, some parents called for outside enrollment limits to protect opportunities for “local” students.

“My question would be why?” Bob Johnson, associate executive director of the Vermont Principals’ Association, says in the film. “If you’re a private school, why would you want to reduce the number of potential students?”

Others asked the same question when a white transfer student from Georgia joined the team to cheers while his black peers drew racial epithets, their coach received death threats and a local host mother faced anonymous and unsubstantiated charges of inappropriate sexual conduct.

By the time fans of opposing teams were chanting “KFC” and cheering in gorilla and banana costumes, The New York Times was telling the nation, “In Vermont, Bronx Players Help Team, but Stir Outcry.”

The team went on to win the 2012 Division II state championship. But the taunts and threats continued, spurring the coach and principal to resign and the black players to leave the state upon graduation.

The one silver lining: All five have gone on to college, the closing credits report.

“I don’t think anyone truly understands what these young men went through, the type of lives that they came from,” Johnson says in the film. “An environment where violence was a daily occurrence.”

Carleton hopes his documentary will shed light on the situation.

“The issues aren’t just happening in Rutland or Vermont,” he says. “I think the film serves as a microcosm of the nativism — ‘first look out for the locals’ — going on everywhere right now. When you have people going to games yelling racial slurs at teenagers, we as a society have to ask, ‘How do we resolve this?'” 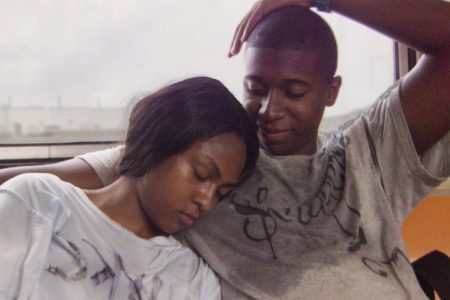