The $13.1 million project will remove accumulated combined sewer overflow (CSO) sediment from the upper portion of the creek to reduce odors in the surrounding community. In addition to the dredging work, DEP recently completed a $1.3 million wetland restoration project, adding 30,000 salt marsh plantings and 23,000 square feet of coastal grassland and shrubland to improve the overall water quality and ecology of the creek and Jamaica Bay.

“The dredging and wetland restoration of Hendrix Creek are two more steps forward in our comprehensive plan to improve one of New York City’s greatest natural resources, Jamaica Bay,” said Commissioner Holloway. “Back in February, Mayor Bloomberg announced $115 million of investments to further reduce nitrogen levels and restore marsh islands in the bay. And in June, we expanded the number of water quality testing sites in the bay by 50%. Now, we are restoring the natural habitat in one of the bay’s largest tributaries and dredging it to reduce odors in the community. Step by step, we are making the bay cleaner and healthier so that New Yorkers will be able to enjoy this ecological marvel for generations to come.”

Dredging will remove 20,000 cubic yards of accumulated sediment at the uppermost 1,400 feet of the creek to eliminate a potential source of odors. The sediment is composed of material from combined sewer overflows which occur when stormwater and wastewater is discharged into surrounding waterways during heavy storms to prevent local wastewater treatment plants from being overwhelmed by increased stormwater flows. The hydraulic dredging method uses a cutter head which loosens the below-water sediment, and pumps, which vacuum the sediment through a flexible pipe onto barges. The pumped material is then dewatered by equipment on barges at the 26th Ward Wastewater Treatment Plant pier. Once dewatered, the material is then transported by barge for off-site processing and disposal. Hydraulic dredging reduces the overall project duration, results in less turbidity within the creek, and has less impact on the local habitat. The creek bottom will then be restored by placing an 18-inch layer of clean sand atop the dredged surface to cap the remaining sediment within the dredged area of the creek. It is anticipated that the project will be completed in late summer 2011.

The Hendrix Creek Wetland Restoration Project restored 30,000 square feet of salt marsh habitat and 23,000 square feet of a coastal grassland and shrubland habitat. The restoration removed highly invasive plants, including phragmites, Japanese knotweed and mugwort and debris from the shoreline. The improved habitat allows for greater plant diversity and the return of native plants that had been previously displaced by the invasive ones. Restoring additional tidal salt marsh and adjacent plant communities in a tributary of Jamaica Bay helps provide key ecological functions, including: additional nursery, forage and refuge habitat for the 91 species of fish in the bay; use by migratory and resident birds; and water filtering.
Jamaica Bay is a 39-square-mile water body with a broader watershed of approximately 142 square miles that includes portions of Brooklyn, Queens and Nassau County. The bay is a diverse ecological resource that supports multiple habitats, including open water, salt marshes, grasslands, coastal woodlands, maritime shrublands and brackish and freshwater wetlands. These habitats support fish, birds and many reptile, amphibian and small mammal species. The bay is a critical stop for birds along the Eastern Flyway migration route and has become an internationally renowned birding destination. Portions of the bay, most notably the Jamaica Bay Wildlife Refuge, have been designated as Significant Coastal Fish and Wildlife Habitats by the federal and state governments.

The City announced in February that it would make $115 million in new investments to improve the overall water quality and mitigate marshland loss in Jamaica Bay. The investments include $100 million to install new nitrogen control technologies at wastewater treatment plants located on Jamaica Bay. The investments, made in concert with $95 million the City already has committed for nitrogen control upgrades, will reduce the nitrogen loads discharged into Jamaica Bay by nearly 50 percent over the next ten years. The City also will invest $15 million for marshland restoration projects around the bay beyond the investments made in these Hendrix Creek projects.

Since 2002, the City has invested $37.4 million to reclaim more than 440 acres of environmentally sensitive land adjoining Jamaica Bay and plans to remediate nearly 100 additional acres. The City will leverage its new $15 million investment in the bay’s marshlands by applying for Federal matching funds, which could net an additional $30 million in funding for Jamaica Bay marshland preservation projects.

DEP manages the City’s water supply, providing more than 1 billion gallons of water each day to more than 9 million residents, including 8 million in New York City, and residents of Ulster, Orange, Putnam and Westchester counties. New York City’s water is delivered from a watershed that extends more than 125 miles from the city, and comprises 19 reservoirs, and three controlled lakes. Approximately 7,000 miles of water mains, tunnels and aqueducts bring water to homes and businesses throughout the five boroughs, and 7,400 miles of sewer lines take wastewater to 14 in-city treatment plants. 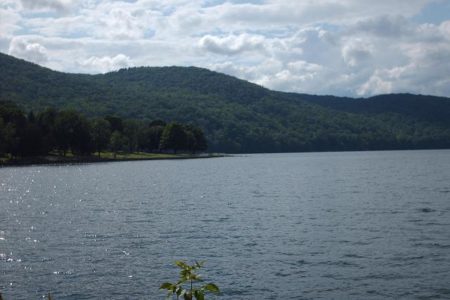