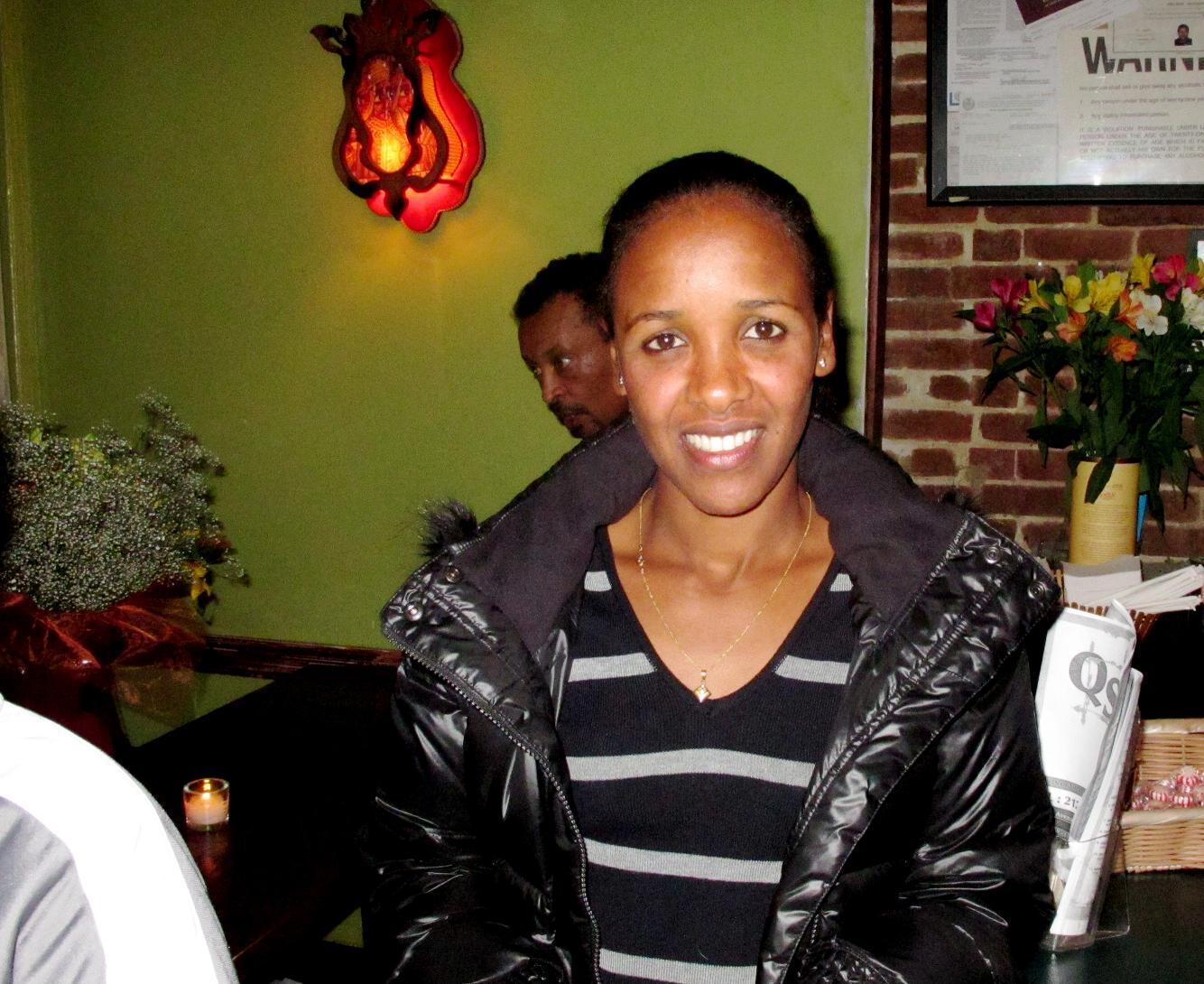 “It’s the song of a champion—to honor them,” said Zinash Baruda, a friend of the restaurant’s owners. “Today we are all proud.”

When Deba and Dado crossed the marathon finish line four seconds apart, Dado just ahead of Deba, it was the final stride in a decade of running parallel. They first met in 2002, and trained together in a runners club in Arsi Asella, Ethiopia. Sunday night after the race, they celebrated together over a shared meal of their Ethiopian home’s regional food.

For Bronx resident Deba, the restaurant is like home. When she first immigrated to the U.S. six years ago, she lived with the Mengistu family in New Jersey, babysitting their two boys to earn her keep. This year, Izana Mengistu, the older of the two boys, watched Sunday’s marathon from “VIP seats” that Deba arranged for the Mengistus.

“She’s like an older sister to me,” said Izana Mengistu. Thoughout the night, Deba adjusted the boy’s sweater or glasses or put her hand on his cheek. “She’s family.”

The dinner was an understated affair—just over two hours total. Dado wore flip-flops; Deba wore flats. Each woman’s shoulder-length hair was pulled back in a simple pony tail, Deba’s secured with a rhinestone clasp. While Deba moved around the small room hugging friends and smiling for guests’ photos, Dado sat in their booth, relaxing with her coach and friends.

After one toast— served in the half-dozen champagne flutes the restaurant had on the shelf—the women, their husbands and four close friends tucked in to an Ethiopian dinner shared from one large plate.

Philipos Mengistu chose the dishes for the group: yebeg wot, a lamb stew, and kitfo and quanta firfir—two dishes of seasoned beef.

“After a marathon, runners will eat anything,” said Mengistu, who served the 2010 men’s winner, Ethiopian runner Gebre Gebremariam, after last year’s race. “But any Ethiopian, not just Buzunesh, wants their hometown’s food.”

Dado is vegetarian, so Mengistu also prepared tomato salad, lentil and cabbage dishes from the menu. Vegetarians are rare among Ethiopian prize-winning runners, Dado said through her coach and translator, Haji Apilo. The New York marathon course, though, is more challenging than most, Dado said, so she may eat a little bit of chicken over the next week.

Deba needed the meat, she said, and dug into the lamb stew first, then the cubed beef and marinated chicken to repair her body from the 26-mile race. Before the marathon, she’d eaten only a banana and small piece of bread and she said she threw up immediately after the finish line.

At their dinner, the two women – coincidentally wearing matching striped knit tops – told the story of the marathon as a shared experience.

But this terrain they knew, she added. The New York City Marathon is considered hillier than most other major marathon courses and, in this way, is similar to their training in Ethiopia.

Deba did have cramps in the first mile and the last, she said. “It’s hard when you cramp. It makes me lose confidence.”

But in the last mile, the cheering Deba received from fans excited to see a New York resident at the front of the pack encouraged Dado as well, as they ran side-by-side. At the finish, “we hugged each other first,” Deba said.

Neither woman was certain of the next step, but Deba and her husband plan to use some of the marathon prize money to buy a house in the Bronx. After that, she said as she leaned on a bar stool, she’d like a vacation.

Dado, who started to fade around 10 p.m., had one word for what she’d be doing tomorrow.