New York City and New York State officials, along with non-profit organizations, demanded during a press conference on October 19, 2011 a Federal monitor in the New York Police Department’s “stop and frisk” policies. 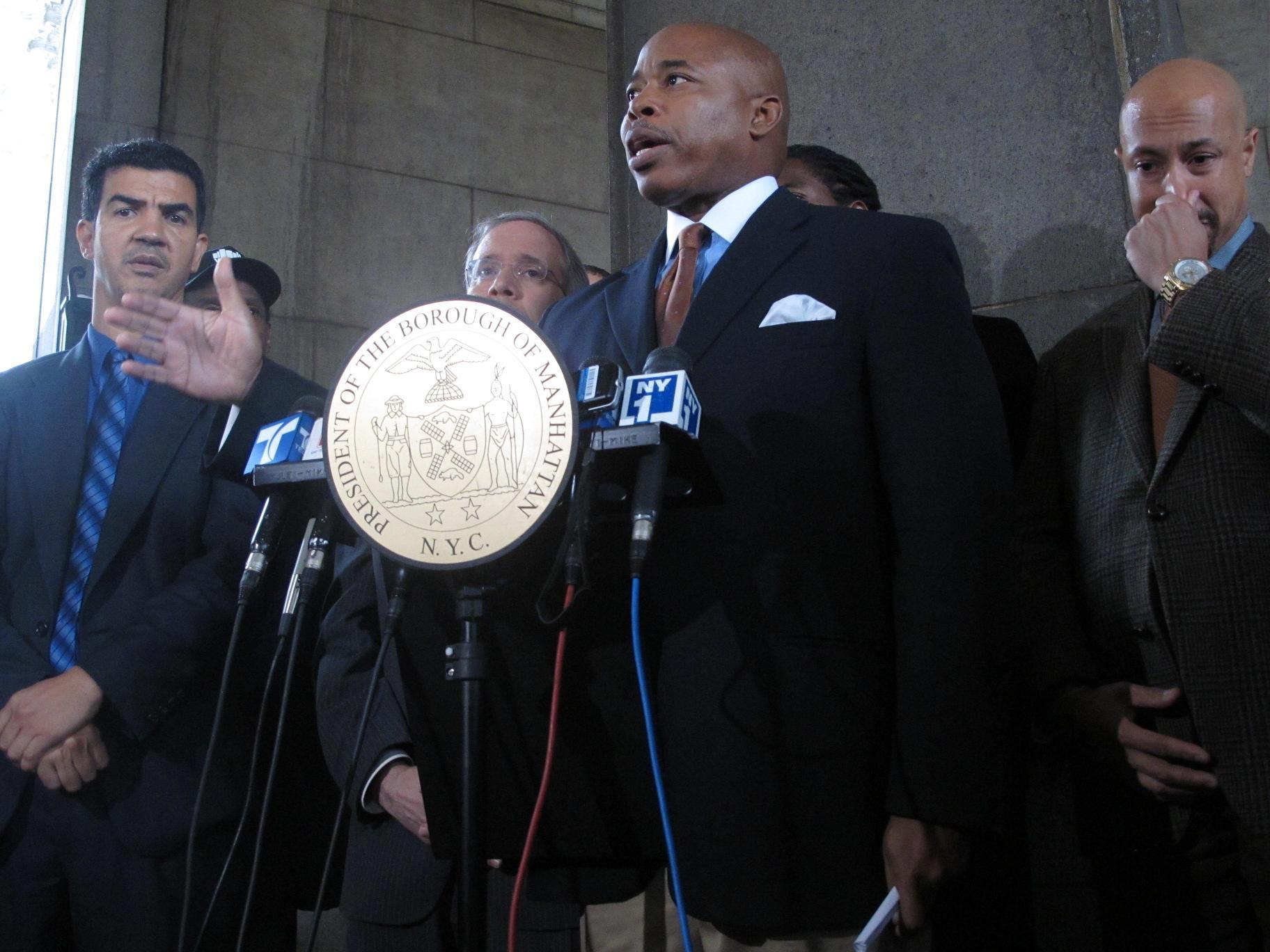 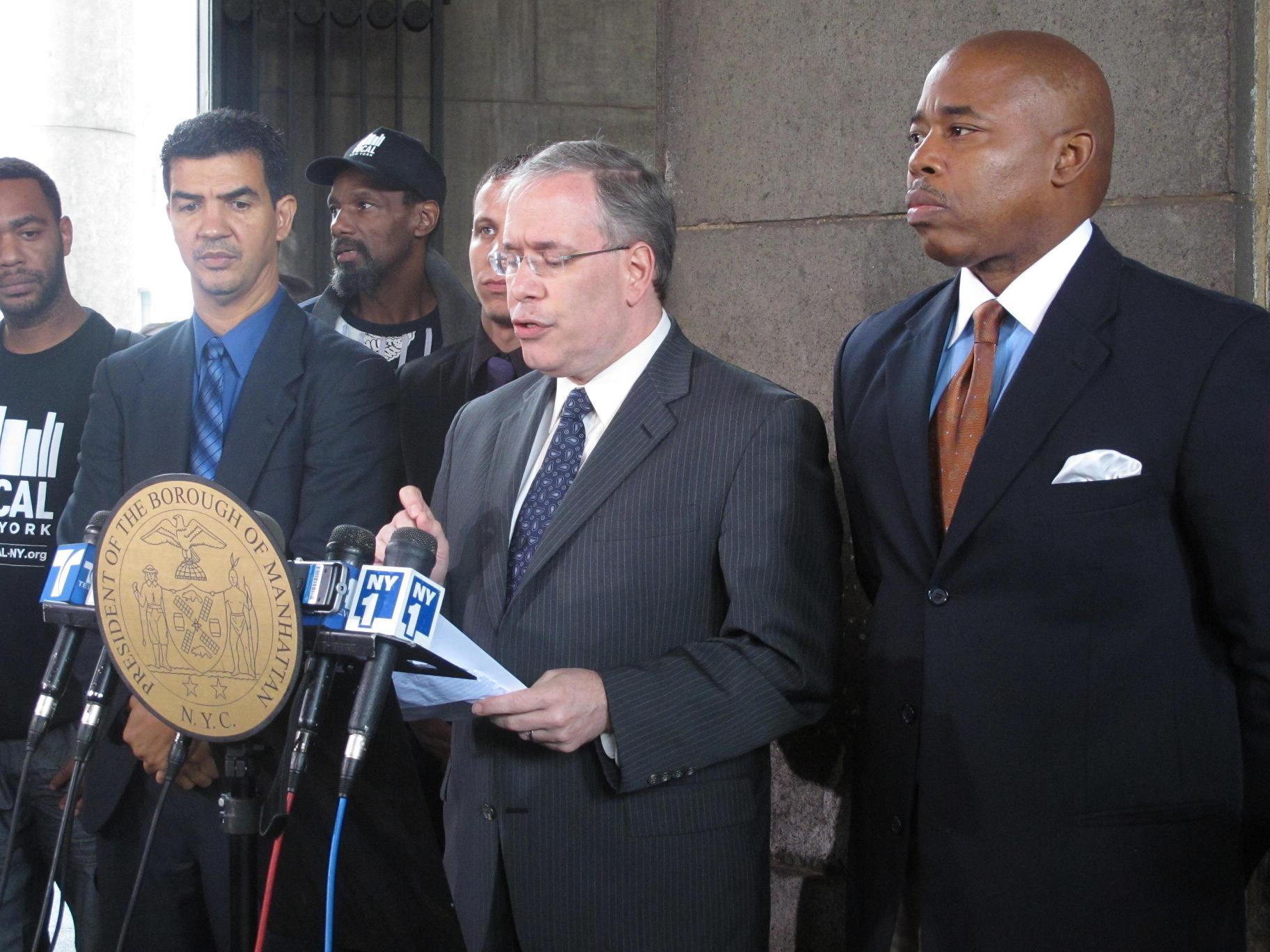 The tip of the iceberg for the sought federal civil rights investigation is the case against a New York City police officer, Michael Daragjati, charged with falsely arresting a Black man on Staten Island in April. Daragjati is not just one bad apple, State Senator Eric Adams of Brooklyn said. “We have an entire bad tree in the New York City Police Department that supports and condones the illegal stop, search and frisk of innocent New Yorkers.”

Adams, a former New York City police captain, said the policy in itself is not a bad policy. “I used to use it when I was a police officer,” Adams said. What needs to change, he added, is the New York Police Department’s presumption that a person’s skin pigmentation is an indication of criminal behavior.

Manhattan Borough President Scott M. Stringer said the way the policy was executed by the police is unconstitutional. “I am very tired of having to explain to parents why their children, African American or Latino young men, are simply being stopped randomly almost on a daily basis not to reduce crime, but to simply harass these young people,” Stringer said.

According to data analysis of New York City Civil Liberties Union based on police reports, the police stopped 362,150 New Yorkers from January until June of 2011. Of them, 88 percent were “totally innocent.” Jennifer Carnig, a press officer at the union, said that 88 percent of the people who were stopped, searched, and frisked walked away without being arrested but were harassed.

The office of the Deputy Commissioner of Public Information did not reply to an e-mail asking for comment.

Stringer and Adams said the police department needs to change its “stop and frisk” policy immediately. One way to do that is to search people who fit the description of a person on the “wanted” list, Adams said. If someone was robbed and described the thief as having a red tie, the police should only stop people they see wearing a red tie, he added. “Then they should search only the area where they believe the weapon is located,” Adams said.

Adams also added that as part of an official federal investigation, the United States Department of Justice had to compare how many of the total arrests were as a result of stop and frisk.

A letter was sent to U.S. Attorney General Eric H. Holder Jr. three months ago requesting a federal investigation. “We have no official reply that they’re conducting an investigation,” Adams said.

Nahal Zamani, education and outreach associate at the Center for Constitutional Rights, said the organization has identified three major problems around the “stop and frisk” policy. It unjustly targets Black and Latino New Yorkers; it instills fear in citizens; and it’s ineffective in taking guns off the streets. In 2009, according to New York Police Department’s stop-and-frisk statistics, 576,394 people were searched, finding weapons, such as guns and knives, in 1.25 percent of them. Last year, police found weapons in 1.26 percent of the 600,601 people, who were stopped and frisk.

The Center for Constitutional Rights filed a class action stop-and-frisk lawsuit on April 16, 2008 that charged the police department with engaging in racial profiling as a from of the “stop and frisk” policy. The case survived the City’s Motion to Dismiss on August 31, 2011, and is now headed for trial.Council Member Jumaane D. Williams – D-NY, of the 45th District in Brooklyn, said he was insulted when he found out a police officer was reprimanded for using pepper spray on a protester from Occupy Wall Street. Williams said it was bad when the police mistreated the protesters, but it was even worse when a Black or Latino man was not protesting, going to school, going to work, but enduring police racial profiling. “I am happy that he got reprimanded but what about us?”“I am not a criminal. My nieces and nephews are not criminals. Please, stop treating us as such,” he said.

Stringer said white people must also speak out in order to influence the New York Police Department to change its “stop and frisk” policy and to pressure the Justice Department to formally monitor the police. “The city must come together on this issue, we must demand reform and it can’t just be the African-American and Latino brothers and sisters in this city.”

Running For President Of The Dominican Republic–From The South Bronx