It was recently publicized that on August 28, 2009, the Association for Vision Rehabilitation and Employment, Inc. (A.V.R.E.) assumed responsibility for the operation of the switchboard communications call center at the Bronx, New York James J. Peters Veterans Administration Medical Center (VAMC). This contract creates nine new positions and adds $565,000 in annual sales. The majority of positions are being filled by persons who are legally blind.

“The Bronx VAMC contacted A.V.R.E. about this opportunity because of our 10 year record of providing outstanding switchboard services to veterans, their families and hospital personnel at the Mid-Hudson VAMC. Our operators take great pride in providing the highest level of service for our veterans who have selflessly defended our country” said Ken Fernald, A.V.R.E Vice-President of Operations.

The Bronx employees will earn more than $15 per hour with a generous allowance for fringe benefits under the provisions of the Service Contract Act. The Contract falls under the AbilityOne program of the federal Javits-Wagner-O’Day Act.

According to Rick McCarthy, A.V.R.E. Director of Program Services “A wide range of simple and very complex access technology must be applied to make operations like this successful in employing individuals with sustained severe and total vision loss. We deeply appreciate the support of the New York State Commission for the Blind in assuring the application of this technology”.

The VA Medical Center in the Bronx is the oldest VA facility in New York City, celebrating over 75 years service to veterans. The Medical Center is situated on a historic site in the borough of the Bronx. Located on the highest point in New York City, it served as a strategic vantage point during the Revolutionary War. In 1847 Frederick Bailey bought several acres of land where the hospital now stands. After his death In 1889, Bailey’s heirs sold the estate to the Sisters of Charity of the Catholic Archdiocese of New York. The Sisters of Charity constructed and operated an orphanage on the site until 1920. The Boy’s Chapel, built in the 1800’s, remains on the campus and is used daily.

In 1921, the Treasury Department purchased the property from the Archdiocese of New York for use by the U.S. Public Health Service as a hospital for ex-service patients suffering from mental and nervous disorders. The purchase was turned over to the newly formed U.S. Veterans’ Bureau by Executive Order on April 20, 1922.

By adding several buildings throughout the years the Bureau made the Bronx hospital the second largest VA facility in the nation and the first veteran’s hospital in New York City. More recently, a 9-floor replacement facility was built through the late 70’s and dedicated in 1981. The modern replacement hospital includes an adjoining 2-floor nursing home and a 5-floor Research Building.

Additionally, the James J. Peters VAMC serves as home to the Network 3 Telephone Triage service. This system, staffed by Registered Nurses and available 24-hours a day, provides telephone helpline service for veteran patients of 36 VA medical centers in VISN’s 3, 4, 6, 19 and 8 (for emergency back up only). This is the only VA telephone care program that is nationally accredited. 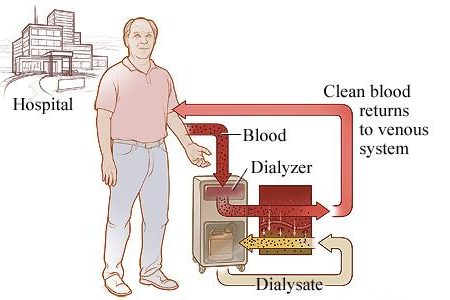 Coping With Kidney Failure In The Bronx