Bronx serial bride, Liana Barrientos, appeared in court on Thursday and said “I do” to a felony fraud charge for allegedly marrying 10 men over the course of 11 years as part of an immigration scam, reports the New York Post.

Barrientos allegedly tied the knot with foreign-born grooms who filed for citizenship within weeks of exchanging vows. Prosecutors said she also married a few men from countries harboring terrorists, including Egypt, Mali, Turkey, Pakistan and Bangladesh. One of her husbands was even deported back to Pakistan in 2006 after allegedly making threats against the U.S., says the reports.

Her marriage spree began in 1999, and she managed to marry six men before her first husband, Mohamed Gebril, filed for divorce in 2002. She wed five times in 2002 alone, authorities said.

There were so many weddings that Barrientos had trouble remembering the names of all of her husbands.

At the pinnacle of her nuptial spree, she was married to eight men at the same time and by 2010 had filed for marriage licenses in several New York counties by using variations of her name, says the report.

Last Thursday, the Bronx Supreme Court judge came down on her hard for endangering the American people, telling Barrientos that she could have “accidentally married a terrorist.”

Barrientos, 40, who plead guilty to the felony charge, told reporters: “I apologize to the American people because I could have put them at risk.” She added, “I could have let people stay in this country who could have killed us.”

She lamented that she regretted disappointing her kids and said, “I could have brought bad people here who could kill. I could have let people stay in this country who could have bombed [New York] or anywhere else. That’s f—ed up.”

When asked by reporters about her reckless and felonious actions, she replied: “It was a stupid moment. The father of my child was in jail, and getting $5,000 to $10,000 for 10 minutes [getting married] was better than stripping or selling drugs.”

According to the report, Barrientos agreed to a plea deal in July 2016 in exchange for up to 18 months in an outpatient program treating substance abuse and mental illness, with the understanding that she could likely face time behind bars for up to four years if she fails to comply with the program, gets re-arrested, or tests positive for drugs.

Upon completing her 12-to-18-month rehab program, the judge promised to knock her charge down to a misdemeanor. 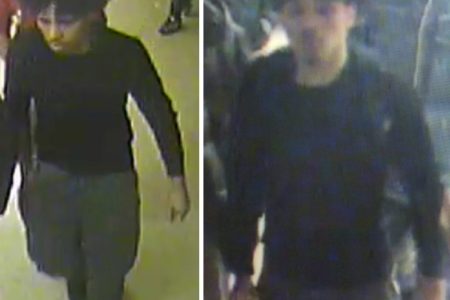 Help Identify A Person Who Shot At A Crowd