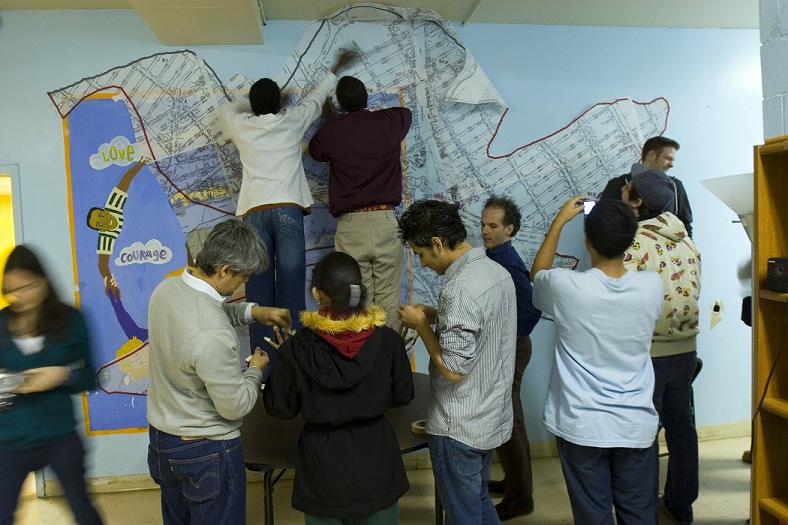 Since January 2009, Levi and Schachter have worked with over 100 Bronx high school students and their teachers, local community leaders, and architecture students and practitioners in and around New York City to design and build a floating, large-scale model of the Lower Bronx River Watershed.

Made from recovered materials including 3,000 used MetroCards, 30 broken umbrellas, 2,000 plastic bottles, 300 sycamore burrs, and 50 PVC window frames hauled off a demolition site, the model will be assembled and launched on June 11 from 219th Street into the Bronx River, accompanied by a thirty-canoe-strong flotilla of the BRX participants responsible for its creation. After spending the previous night camping out along the river, the group will guide the giant watershed model downstream and pull ashore at Hunts Point Riverside Park for a public presentation and reception. Downloadable map of the BRX course is attached to this article (look right).

BRX complements current ongoing efforts for environmental reclamation by local activists and inspires prolonged collaborative design investigation that will strengthen links across neighborhoods, institutions and public space along the river. Summoning a broad-based community and culling material from the city fabric itself, Levi and Schachter physically activate and recast the Lower Bronx River Watershed as the ecological and social spine of the borough. The BRX Watershed model displays both seen and unseen elements of the region – including the historical ecology of the watershed, neighborhoods, buildings, transportation infrastructures, storm water and sewer networks, the Greenway and other open public space, and a range of evidence and concepts gathered from the personal itineraries of BRX participants. Following its launch down the river, the model is planned to tour Bronx schools in Fall 2009.

PUBLIC RECEPTION
Please join Alexander Levi, Amanda Schachter, and the BRX participants for a reception at Hunts Point Riverside Park as they share experiences of their efforts from the initial planning and mapping stages through model-building, flotation, and final launch. Presentations will begin at 3:00pm, and the Bronx Watershed Model will remain on view at the park until 6:00pm. No RSVP necessary.

RIVER WALK
For anyone interested in viewing the BRX Watershed Model from the riverbanks while it floats downstream, Levi and Schachter have provided a map and timeline with suggested stopping points. To download the map, click on the attached file on the right of this article. A guided walk may be organized in the coming days; if you would like to participate, please rsvp@vanalen.org and we will notify you of availability.

BRX PARTICANTS
Participating schools and institutions include: Fannie Lou Hamer Freedom High School, Youth Ministries for Peace and Justice, Pablo Neruda Academy for Architecture and World Studies, Urban Workshop, Columbia University Graduate School of Architecture Planning and Preservation, New Jersey Institute of Technology School of Architecture, and Fordham University. Special thanks to: Bronx River Alliance for providing canoes and on-water support; the New York City Urban Park Rangers for guiding the overnight campout; the NYC Metropolitan Transit Authority and the Bureau of Topography of the Office of the Bronx Borough President for materials and maps; and the St Joan of Arc Church for donating their kitchen for food preparation. Levi and Schachter would also like to thank Robert Wrazen for spearheading the construction of the flotation, Katie Kannen for organizing the food preparation, and Damian Griffin, Chris Kannen, Eugenia Pietrogrande, and Eric Sanderson for their support and assistance. Thanks especially to all team leaders, and to all those participants not listed here, whose passion and commitment has been critical to the success of the project. Please click here to see a full list of BRX participants.

BIOS
Alexander Levi and Amanda Schachter are co-founders and principals of SLO Architecture, founded in Madrid in 2005 and currently based in New York City. They have been collaborating since 1996, and prior to starting their office, they were involved in numerous public building projects in the United States and in Europe. Their recent projects include an initiative for low-cost single-family housing in North Carolina, winner of the 2003 Home House Project, and the designing of Migrant farmworker housing in Lleida, an inland province of Catalunya, for which they received a grant in 2005 from the Generalitat de Catalunya. SLO Architecture has provided design services, after-school programs, and workshops for public schools in Barcelona, and a new Charter School in the Bronx. Both Levi and Schachter have previously taught at the the Escola Tècnica Superior d’Arquitectura in Barcelona, where Schachter founded the Master of International Cooperation in Architecture in 2003 to promote community-based sustainable design. Schachter attended Columbia University in New York, and received her M. Arch from Princeton University. Levi attended Wesleyan University and received his M. Arch from Yale University.

The Bronx River Alliance serves as a coordinated voice for the river and works in harmonious partnership to protect, improve and restore the Bronx River corridor so that it can be a healthy ecological, recreational, educational and economic resource for the communities through which the river flows.

The Urban Park Rangers’ mission is to link New Yorkers to the natural world. Rangers teach people to care for the environment and the parks, protect the parks and their wild residents, and restore New York City’s natural heritage.

Founded in 1994, the mission of Youth Ministries for Peace & Justice is to rebuild the neighborhoods of Bronx River and Soundview/Bruckner in the South Bronx by preparing young people to become prophetic voices for peace and justice. They accomplish this through political education, spiritual formation, and youth and community development and organizing.

Urban Workshop NYC provides students with an opportunity to engage in rigorous academic learning in an applied setting. Through carefully connected studies in math, science, history and literature, students in the program learn to plan, design and carry out construction projects in various New York City communities.

Saltmarsh
Led by Amanda Schachter and Marc Skelton; Special thanks to Moji Baratloo

Upland
Led by Alexander Levi and Stephen Oliveira; Special thanks to Anthony Schuman 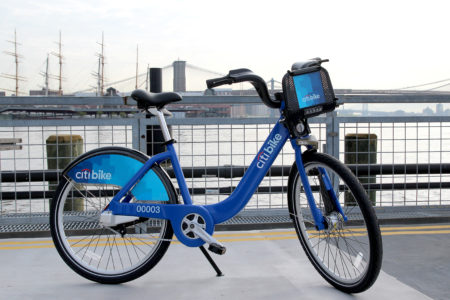