The last time a New Yorker won the city’s namesake marathon, the race did not even go through Bronx.

Forty years later, Buzunesh Deba of East 195th Street hopes to run through the five boroughs faster than any of her competitors.

Deba came to New York from Ethiopia a decade ago as a 17-year-old. She blossomed into one of the world’s top marathoners while training in Van Cortlandt Park not far from her apartment in Bronx, an elite athlete running alongside the casual joggers.

The past two NYC Marathons, she finished second.

“My goal is to be a champion,” Deba said Friday.

In 1974, the NYC Marathon had 527 starters and stayed within the confines of Central Park. One New Yorker, Norbert Sander, won the men’s race, and another, Kathrine Switzer, was first for the women.

Two years later, the course covered all five boroughs for the first time. The marathon visits Bronx for only a mile-and-a-half or so about three-quarters of the way through the race. But it is a loud mile-and-a-half for Deba as her fellow residents scream her on.

These days, Deba does much of her training at altitude in Albuquerque. Her husband, Worku Beyi, is her coach.

They had not been home to Bronx since July when they returned Wednesday for her final preparations for Sunday’s marathon. They are here for 10 days, then head right back. Deba cannot wait to visit her favorite Ethiopian restaurant in the city — there are not any in Albuquerque.

Deba smiled widely when she was asked what it’s like to see the New York skyline from the plane as her flight descends.

She missed New York so much that her first attempt to spent significant time in Albuquerque fell through a few years ago. Now Deba has a strong support system there.

Still, her career progressed just fine with those training sessions in Van Cortlandt. She recalled that people would come up to her all the time and say, “You are my inspiration.”

Deba’s major marathon breakthrough came at the 2011 race in New York. She and Firehiwot Dado, a childhood friend in Ethiopia, trailed Mary Keitany by nearly 2 1/2 minutes at the 15-mile mark, but they came all the way back to pass her. Dado would up beating Deba by four seconds.

After the 2012 marathon was canceled because of Superstorm Sandy, Deba decided to be the one to forge ahead last year. She led by more than three minutes at the halfway mark, but Priscah Jeptoo overtook Deba and won easily.

Deba said she learned her lesson not to break from the pack on a windy day — and similar conditions are expected Sunday.

Her friend was always a gifted athlete and a strong person, said Dado, who will also compete this year. Deba again was the runner-up at a major marathon when she finished second in Boston in April in a personal-best time.

“She’s training very well,” Beyi said. “She can win. I believe it.” 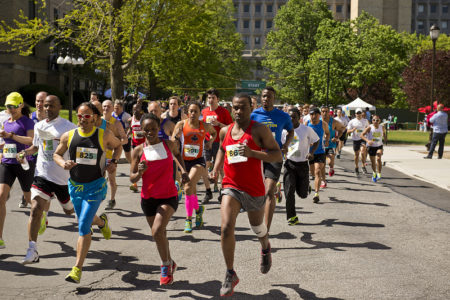