The famous folk music concerts of the 1960s will live again at Lehman College on Friday, May 21, at 8 p.m. as the Lovinger Theatre opens its doors to both alumni of the former “Hunter Uptown” campus and all fans of folk.

The public is invited to the event and can purchase tickets, at $35 each for a single admission or $20 each for two, at www.bronxhoot.org. In the spirit of the folk music era, all proceeds will benefit the Bronx River Alliance, which is working to restore the river and establish a Bronx River Greenway.

The concert will feature performances by the Danny Kalb Trio (formerly of the Blues Project); guitarist Happy Traum (creator of a series of music instruction videos, “Home Spun Tapes”); David Bennet Cohen (former member of Country Joe and the Fish); the Trevone Marching Jug and Skiffle Band; Irka Mateo, a folklore singer from the Dominican Republic; and Danny Hamburg and Gerry Segal, who began producing popular folk music concerts on campus while they were students at Hunter Uptown.

Until 1968, when Lehman was established as an independent senior college of The City University of New York, the Bronx campus had served for more than thirty years as the “uptown” branch of Hunter College. From 1961 to 1967, the semi-annual concerts produced by Segal and Hamburg—which came to be known as the “Hunter College Uptown Hootenannies”—were a happy union of music and political awareness that attracted legendary musicians like Bob Dylan and guitarist Danny Kalb.

Segal and Hamburg, who are organizing the concert, grew up on the same street in the Bronx, became friends and played along the Bronx River as children. They met again later, during their college years, when they both were musicians in the folk music scene. After college, life took them separate ways, but they recently reconnected—via Facebook—and decided to collaborate on a project that combines their Bronx roots, their love of folk music and their connection to the Lehman campus.

The weekend will include a tour on Saturday of the Lehman campus and “jamming and canoe rides” along the restored Bronx River. For more information, contact Bruce Epps at Lehman College at 718-960-1984. 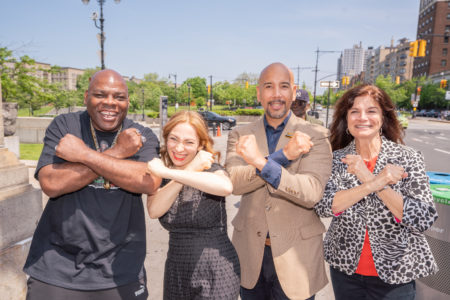