A Bronx demolition company was charged Thursday with dumping a wall of construction debris along the South County Trailway in Dobbs Ferry, NY.

Police say that, around 2 a.m., the company illegally dumped roughly 30 cubic yards of the debris on the South County Trailway, blocking the path near the Dobbs Ferry-Ardsley line. The rubble was discovered around dawn when people running or biking along the trailway encountered the wall of debris lying across the path near Lawrence Street.

“Any illegal dumping on parkland is offensive, but the amount of construction material that was dumped in this incident was particularly egregious,” Public Safety Commissioner George N. Longworth said in a press release. “This company backed a truck up under darkness of night and dumped a substantial amount of material that blocked the trailway.”

The Bronx-based demolition company summonses included charges of depositing of a noisome or unwholesome substance, depositing rubbish or refuse matter on county property and being an unlicensed hauler, all misdemeanors.

Police said the summonses were given to Eddie Verdejo, 43, of Bronx, who is the owner of the company. The charges are answerable August 2, 2012 in Dobbs Ferry Village Court. 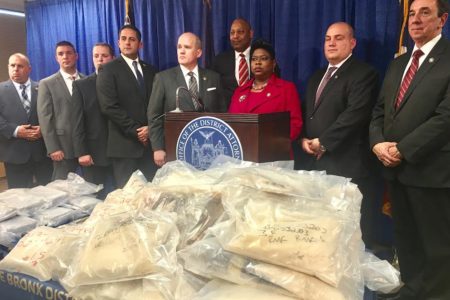