Located in the Longwood section of the Bronx, 920 Westchester Avenue will provide 110 new affordable homes to low-income families

920 Westchester Avenue is being developed under Mayor Michael R. Bloomberg’s New Housing Marketplace Plan (NHMP), an $8.4 billion initiative to finance 165,000 units of affordable housing for half a million New Yorkers by 2014. Since the Plan’s launch in 2003, New York City has already invested more than $4.5 billion and HDC has issued more than $5 billion in bonds to finance more than 108,000 homes. To date, the Plan has funded the creation or preservation of nearly 108,600 units of affordable housing across the five boroughs. Under the NHMP 3,746 affordable homes have been financed in Bronx Community Board 2.

“This groundbreaking is the physical symbol of our City’s continued commitment to advancing the resurgence of the South Bronx,” said HDC President Marc Jahr. “The future development of 920 Westchester Avenue means that hardworking families will have a safe and stable place to call home, and with its innovative green features, it will continue to enrich the community for generations to come.”

“The Bronx is a far different place today than it was years ago, when that old stigma of ‘the Bronx is burning’ defined the borough. Today, thanks to millions of dollars invested by the City, the hard work of our development partners, and the never say die attitude of Bronx residents – the Bronx is booming,” said HPD Commissioner Cestero. “Under the Mayor’s plan we have created more than 33,400 units throughout the Bronx, and more than 3,700 units in this community board alone. From here in Longwood to Melrose and beyond, you can see the bricks and mortar evidence of a new feeling of opportunity that stable, safe, and attractive affordable housing can bring to a community.”

“MJM is delighted to create such needed housing here in the Bronx and thanks all of our public and private partners for making this a reality,” said Manny Kanaris, Principal of MJM Construction Services.

When complete the development will be 8 stories and is slated to contain 110 low-income residential units affordable to families earning up to a maximum of 60 percent of the Area Media Income (AMI). This is equal to a total household income of $47,520 for a family of four, or $33,300 for one person. The residential units will be comprised of studio, one-, and two-bedroom apartments. Additionally, 920 Westchester Avenue will house approximately 10,726-square-feet of retail space and approximately 874-square-feet of community facility space on the ground floor. The development will also have an underground parking garage of approximately 51 spaces.

The building will be constructed using a steel frame structure – using the licensed Girder-Slab® system – and pre-cast hollow-core concrete plank floor slabs. The exterior façade will be made of masonry and pre-fabricated metal panels. The windows will improve energy efficiency by meeting high noise-reduction standards and will feature an insulated knock-out panel to accommodate window-mounted air conditioners, eliminating the need for through-wall air conditioner sleeves and windows that cannot be closed.

The building interior will be finished to a high standard with cost-effective and environmentally friendly materials. Apartments will feature bamboo flooring, stone countertops, porcelain tile in the bathrooms, high-efficiency lighting fixtures, and EnergyStar rated appliances. The public corridors will have cork tile floors and occupancy sensors on high-efficiency lighting fixtures. Low-VOC paints will be used throughout the building.

MJM Construction Services, LLC. is committed to providing extraordinary service and quality workmanship that exceeds the community’s expectations. MJM strives to maintain long term relationships with their clients through professionalism, integrity and fairness. The firm takes pride in its accomplishments and works effectively to help build the future of the communities they touch with each passing day.

The New York City Housing Development Corporation (HDC) provides a variety of financing programs for the creation and preservation of multi-family affordable housing throughout the five boroughs of New York City. HDC’s programs are designed to meet the wide-range of affordable housing needs of the City’s economically diverse population. In partnership with the NYC Department of Housing Preservation and Development, HDC works to implement Mayor Michael R. Bloomberg’s New Housing Marketplace Plan to create of preserve 165,000 affordable housing units by 2014. Since the plan launched in 2004, HDC financed nearly 44,200 homes for low- , moderate- and middle-income New Yorkers. The New York City Housing Development Corporation is rated AA by S&P and Aa2 by Moody’s.

About the NYC Department of Housing Preservation and Development (HPD):

HPD is the nation’s largest municipal housing preservation and development agency. Its mission is to promote quality housing and viable neighborhoods for New Yorkers through education, outreach, loan and development programs and enforcement of housing quality standards. It is responsible for implementing Mayor Bloomberg’s New Housing Marketplace Plan to finance the construction or preservation of 165,000 units of affordable housing by 2014. Since the plan’s inception, more than 100,000 affordable homes have been created or preserved. For more information, visit www.nyc.gov/hpd

New York City’s affordable housing program to build or preserve 165,000 units of housing — enough to house half a million New Yorkers — is the most ambitious and productive in the nation—creating housing as well as jobs for New Yorkers. In April, 2010 the City reached the critical benchmark of 100,000 units financed—representing an investment of $4.5 billion to date by the City, not including roughly $5 billion in bonds issued by HDC.

Led by HPD Commissioner Rafael E. Cestero, the Plan has been recast to maintain momentum while confronting head on the economic challenges facing the city, the state, the housing industry, the financial sector and individual New Yorkers and their families. In order to fulfill the NHMP goal of 165,000 units, HPD and HDC are responding to market realities and focusing on three primary goals: strengthening neighborhoods, expanding the supply of affordable and sustainable housing and stabilizing families by keeping them in their homes. To read more about the NHMP, please visit here. 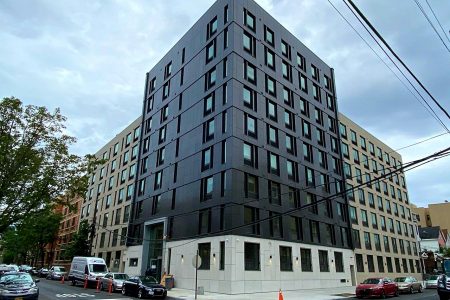