In its latest push to bring housing to underutilized sites, NYCHA has given the go ahead to a fully affordable senior housing building at the Mill Brook Houses in Mott Haven.

The development is part of the Housing Authority’s NextGeneration NYCHA program, which seeks to address the agency’s funding shortage through development on underutilized NYCHA sites like parking lots and playgrounds.

When the plan was first outlined in early 2016, it seemed like the agency was only going for mixed-income developments at NYCHA sites. Plans to bring private rentals to Wyckoff Gardens in Boerum Hill and the Holmes Towers on the Upper East Side had angered residents considerably, but the agency decided to move forward regardless.

In recent months however, NYCHA has also announced fully affordable projects such as a low-income senior building at the Ingersoll Houses in Fort Greene and 188-unit affordable project at the Van Dyke Houses in Brownsville (for families earning between 30 to 60 percent of the area median income).

The project at the Mill Brook Houses was first announced last summer, and now NYCHA is providing new details on the development. The nine-story structure will be built by the West Side Federation for Senior and Supportive Housing, designed by Perkins Eastman, and come with 159 apartments. Located at 570 East 137th Street, the building’s apartments will be for seniors earning 50 percent of the area median income or less.

In addition to the affordable units, this site, which will be known as Mill Brook Terrace, will also come with a 9,000-square-foot community space on the ground floor. That space will have a senior center with a commercial kitchen, and activity rooms for senior programming. There are also plans for an outdoor garden and a landscaped terrace on the second floor. Construction is expected to wrap in 2019. 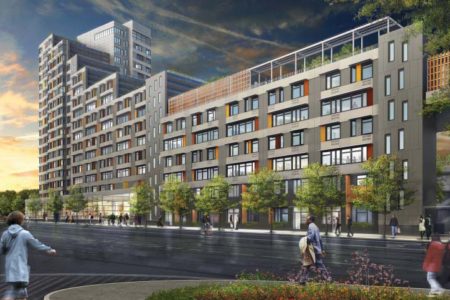