Chances are, when you think of Bronx, you do not picture many of the neighborhoods that comprise Council District 13, where one of the more interesting races in the northern borough will take place on Primary Day, September 12, 2017.

Not only does the district include Bronx’s seaport, City Island, and the seaside communities of Edgewater Park and Silver Beach, it also encompasses the suburban-style blocks of Morris Park and the affluence of Country Club.

Allerton, Ferry Point, Locust Point, Pelham Bay, Pelham Gardens, Pelham Parkway, Schuylerville, Spencer Estates, Throggs Neck, Van Nest, Waterbury LaSalle, Westchester Square and Zerega are also part of the sprawling district. Some of those neighborhoods do boast the tan-bricked, six-story apartment buildings that characterize the rest of Bronx. And architecture is not the only feature that distinguishes the area. Bronx Community Board 10, which makes up most of the Council District, is 32 percent white and Community Board 11, which makes up the rest of the Council district, is 21 percent white. Overall, whites make up only 10 percent of Bronx.

The area is changing, however. Community boards 10 and 11 saw their white population share fall by 17 and 15 points, respectively, over the first 15 years of the 21st Century. (That reflected the pattern borough wide. The white share of Bronx population fell by nearly one third from 2000 to 2015 and, over that time, only two of the 11 statistical areas in the borough saw an increase in whites’ presence — the most significant was in Highbridge, where the white population share leaped from 1.5 percent to a still puny 2.4 percent.)

The field in this year’s Democratic primary for City Council is less diverse than the district. The ballot includes three white males—Assemblyman Mark Gjonaj, businessman and advocate Egidio Sementelli and political operative John Doyle—and one Latina, Marjorie Velazquez. The current occupant of the office, James Vacca, is term-limited out.

The race has generated more fundraising and more spending than any other Council race in the city so far, with more than $1 million raised and spent. Nearly three-quarters of the money is Gjonaj’s, who has spent $716,000, leaving him with just $28,000 on hand at last report—less than Doyle or Velazquez, even though they did not raise nearly as much in donations as Gjonaj did ($692,000) or loan their campaign $50,000, as Gjonaj did in mid-August. About a third of Gjonaj’s spending has been on campaign staff, consultants and lawyers.

As City Limits reported last month, Gjonaj’s opponents have raised questions about his campaign finances—how much of his money comes from out of state and the presence of donations from controversial landlords. That hasn’t stopped the Democratic state legislator from snatching up big endorsements: The Uniformed Fire Officers Association backed him last week. The question is why would someone with so much institutional support and the best name recognition in the race by far need to spend so much dough: Only mayoral candidates Michael Tolkin, Paul Massey, Bill De Blasio and Bo Dietl, along with Bronx borough president Ruben Diaz, Jr., have spent more than Gjonaj this year. 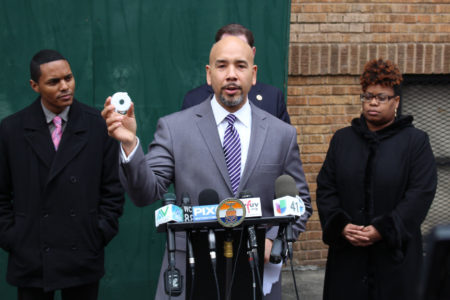