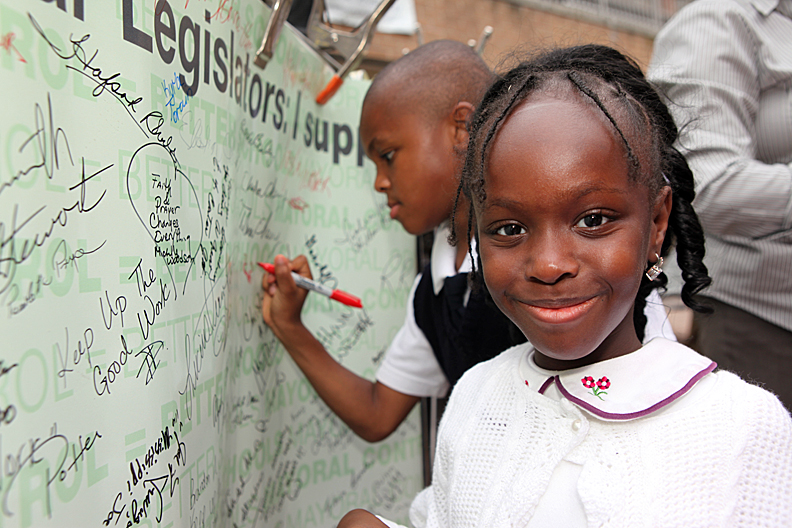 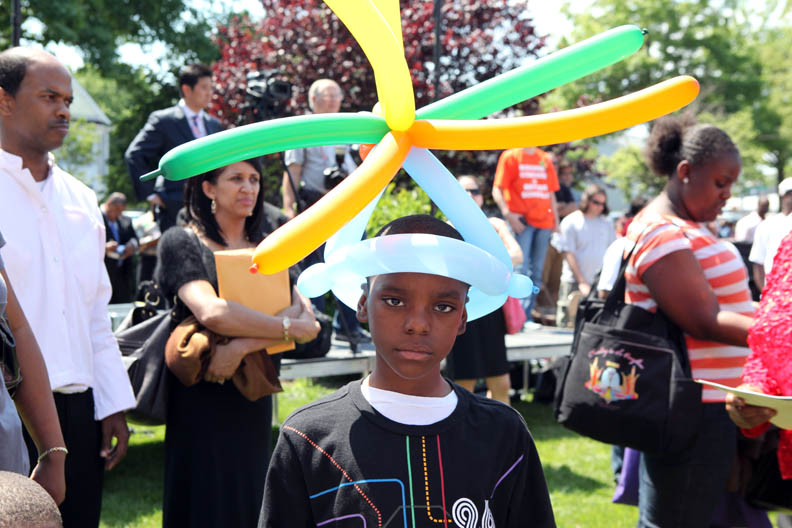 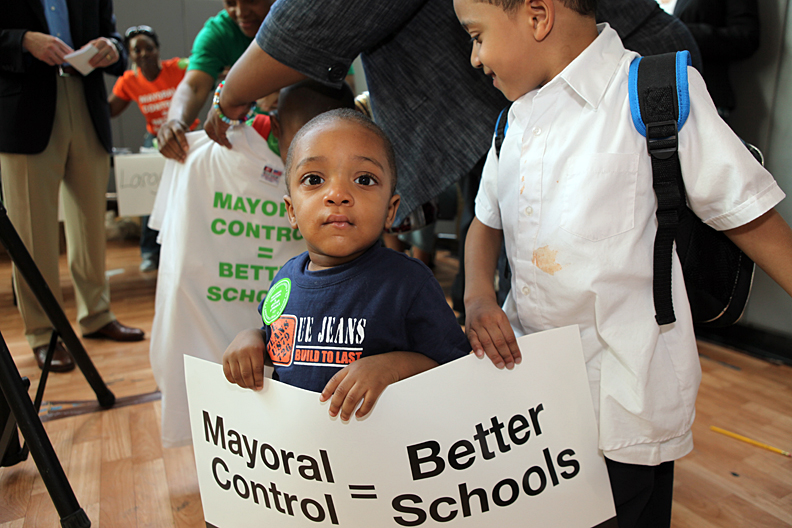 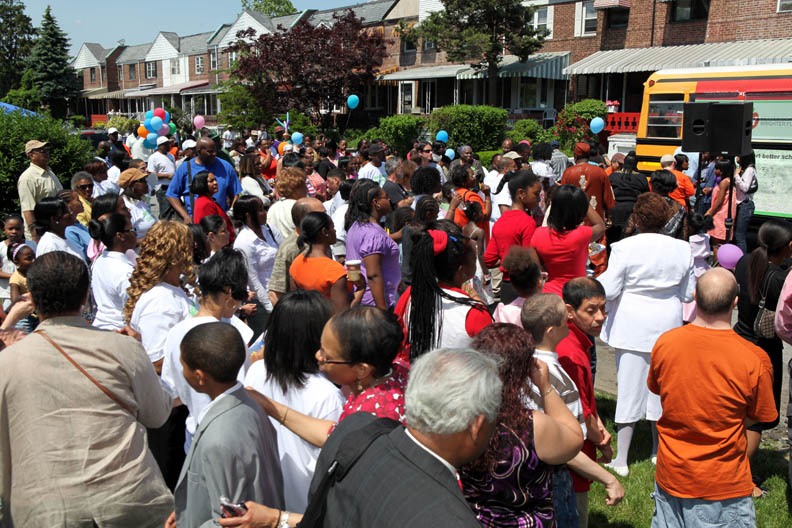 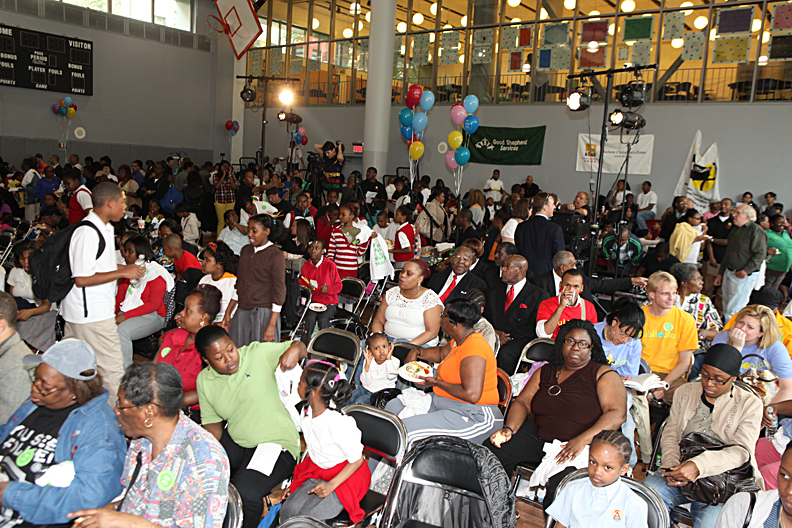 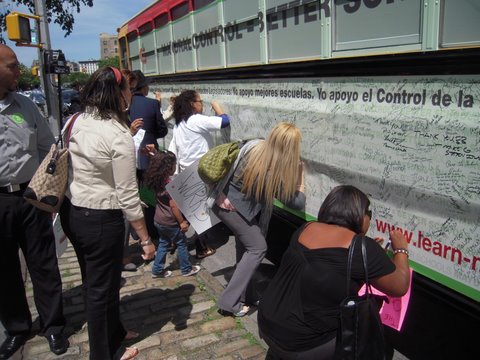 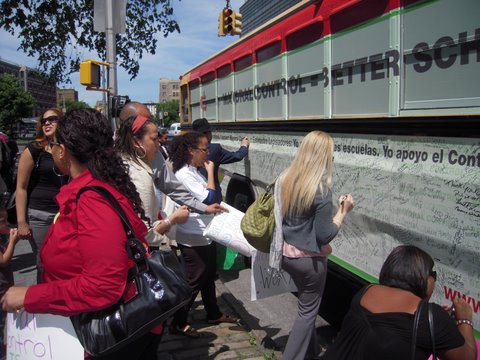 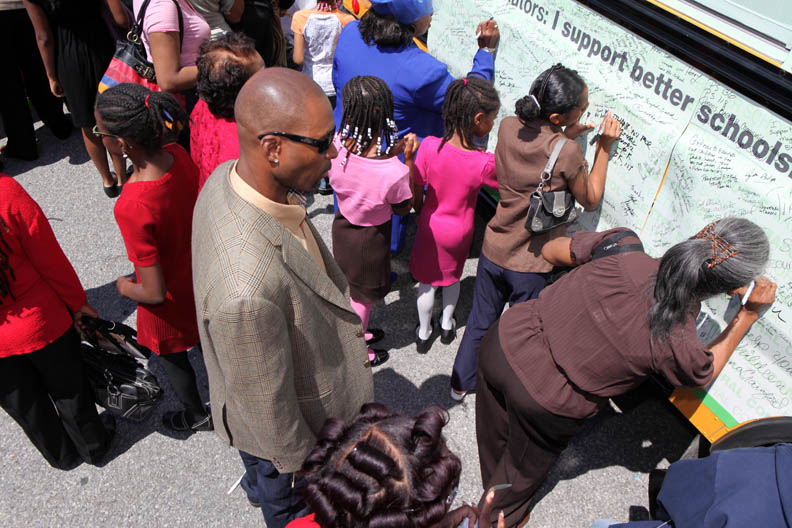 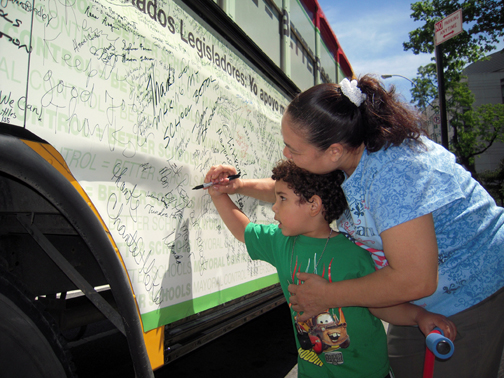 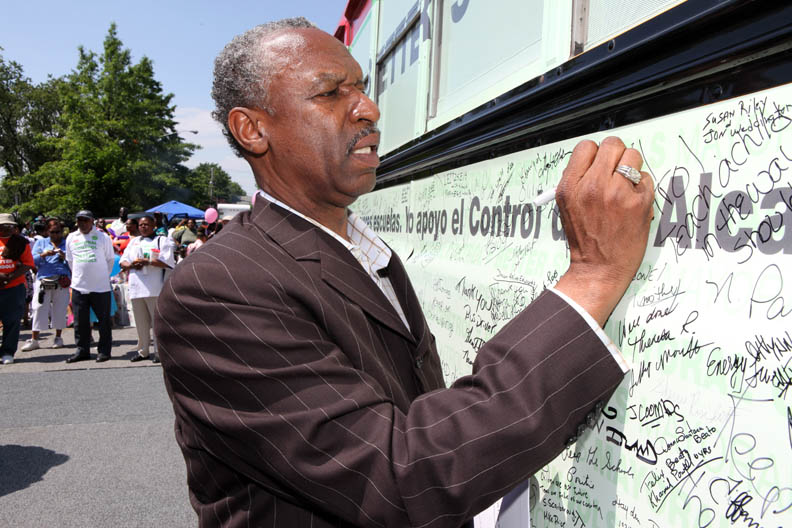 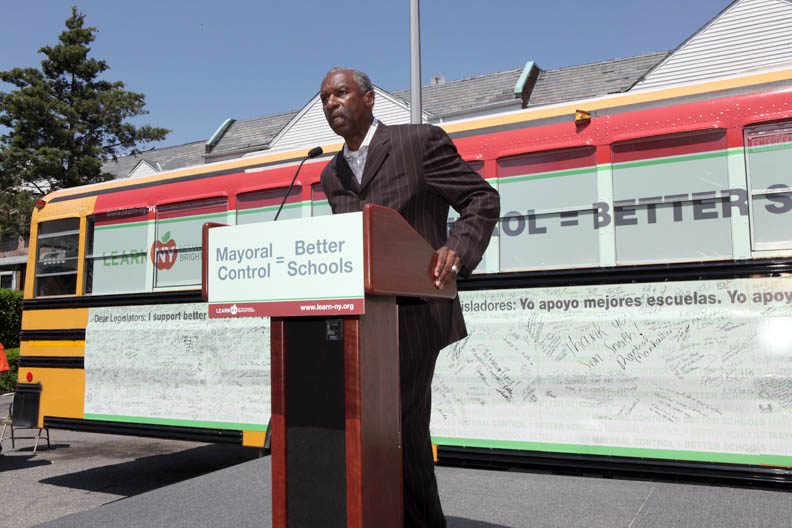 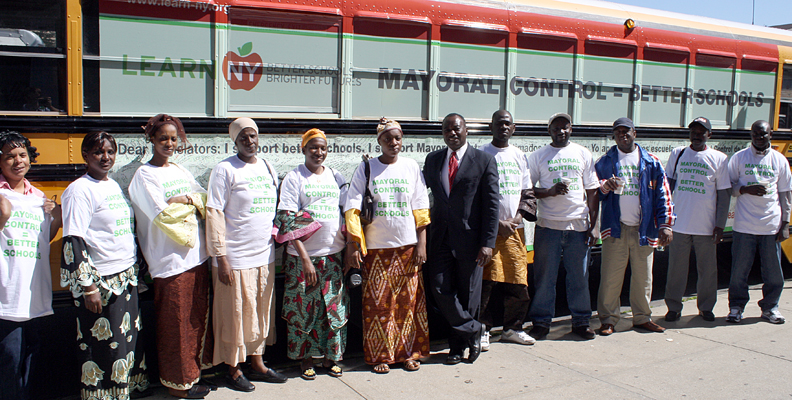 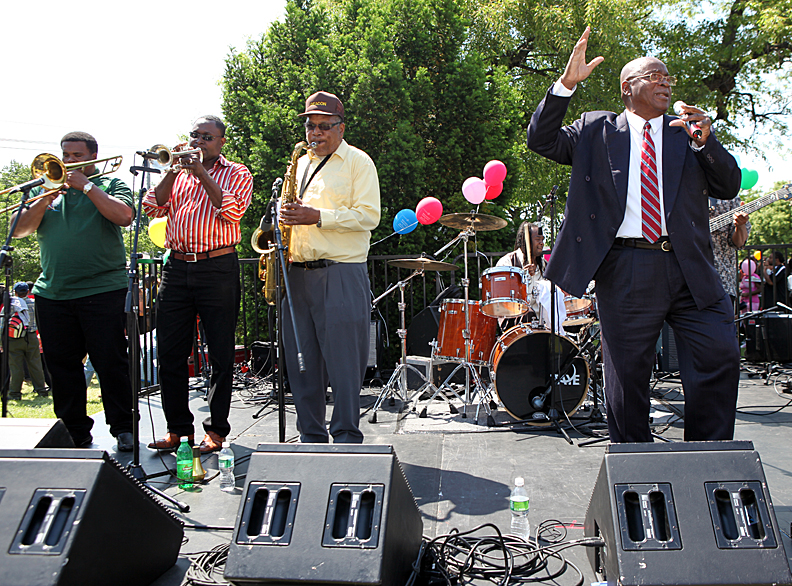 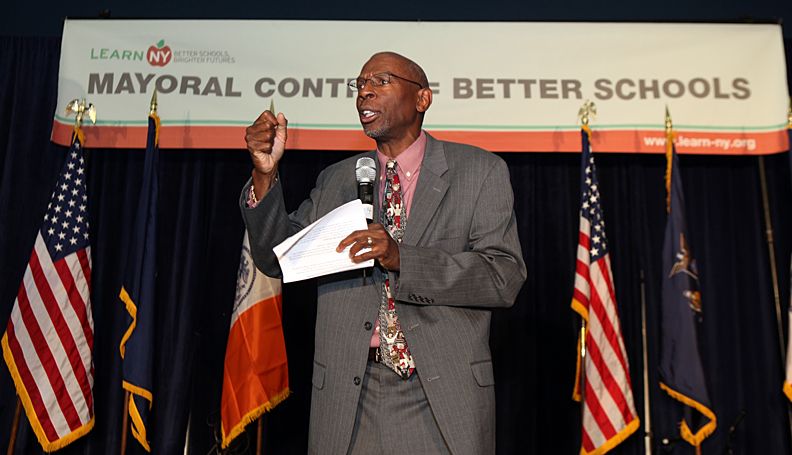 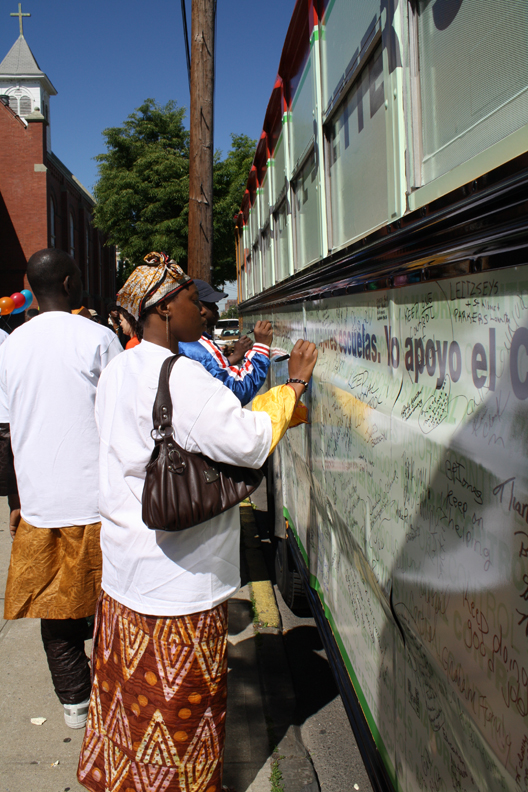 With the deadline for renewing the mayoral control law just weeks away, thousands of people showed their support for Mayoral Control by signing a giant petition affixed to a yellow school bus thanking the State Legislature for enacting mayoral control in 2002 and calling on them to renew the law this June. Attendees at tour events also sent postcards to their legislators asking them to renew mayoral control – approximately 2,000 letters were sent in total.

The bus tour began early Sunday morning in Staten Island at First Central Baptist Church where Reverend Demetrius Carolina led parents, students, and community leaders in thanking the State Legislature for enacting mayoral control in 2002 and in calling on them to renew the law this June.

“For decades, the Mayor didn’t have the power to fix the schools because he didn’t have the authority over the Department of Education.  The DOE couldn’t fix anything because they shared power with 32 local school boards.  Every decision was mired in bureaucracy and red tape,” said Pastor Demetrius S. Carolina.  “I served on one of the 32 neighborhood school boards and saw first-hand how decentralized the system was and how difficult it was to get things done. While many people had authority, very few people were in a position to effect real change or could be held accountable for productive meaningful change.”

“Today, change is no longer impossible.  Under the Mayor’s leadership, school graduation rates are up, crime is down, and our children are performing at higher levels in reading and math.  We have made real progress and we cannot afford to go back,” continued Pastor Carolina.

The tour then continued on to Jamaica, Queens, where the Reverend Dr. Floyd H. Flake led nearly 3,000 parents, students, educators and community leaders in a large celebration at the Greater Allen A.M.E. Cathedral.  While enjoying performances by student dance troupes and Calypso legend Mighty Sparrow, families showed their support by signing the pledge card affixed to the Learn NY bus.

“It is absolutely essential that New York City continues to have mayoral control,” said Rev. Flake.  “Since 2002, our schools have been moving forward in a progressive manner.  The historical failures cannot rise again.  We need to make certain that every child in our city has an opportunity to receive the best education.  Mayoral control is our chance to keep the progress going.”

“Our students at every level are moving forward under mayoral control. We need to continue mayoral control as it is because it results in accountability. We don’t need to go back to the old system of pointing fingers when children fail,” said Assemblywoman Barbara Clark.

“I can see my child’s school improving as a result of mayoral control.  Schools are safer and better funded,” said Donna Santana, public school parent and member of the Greater Allen A.M.E. congregation, who spoke at the Jamaica event.  “Teachers are better paid and more qualified.  And thanks to fair funding across districts – based on need rather than politics – all students now have access to a high-quality education.”

On Sunday, the bus also made stops in Co-Op City, Bronx and Flushing, Queens. Bishops Angel and Nancy Rosario spoke to parents and community leaders outside the Church of God’s Children in Co-op City and parents joined Learn NY in signing the bus in Flushing.

“We must keep mayoral control,” said Archbishop Angel Rosario, Church of God’s Children.  “We’ve seen too much progress in our schools to start going back to the old ways.”

“I’ve been in the system for 40 years,” said Ann Purnell, a parent whose son attends Bronx Aerospace High School.  “My oldest daughter is 40 and my youngest child is ten.  Mayoral Control has made a significant advancement in the way students learn, teachers teach and in better preparing our children to go on to college.  We can’t go back to the old days of no accountability.”

On Monday, the 5-borough tour resumed with two events in Brooklyn – outside P.S. 272 in Canarsie and at the offices of Groundwork Inc., a Learn NY coalition partner – where parents, teachers and kids gathered to sign the bus and urge legislators to renew the law.

“Mayoral control has become synonymous for me with empowerment and greater student achievement, said Dakota Keyes, Principal of P.S. 272. “ And it is the system-wide accountability that makes it possible for school administrators to be true instructional leaders.”

“As a parent, I have seen schools get significantly better since Mayoral Control,” said Iris McDaniel, a parent from Urban Action Academy in Brooklyn. “It’s very important that the State legislature renew the law this June so we can keep the progress going.  We need to continue making progress.”

Monday afternoon, the Learn NY bus – now full of thousands of signatures – then travelled to Washington Heights where parents and educators from the Community Association of Progressive Dominicans (ACDP) came together to thank the State Legislature for enacting the mayoral control law seven years ago.

“In the old days, it seemed like at the highest levels of city government, no one was watching our schools.  And while the mayor wasn’t watching, the schools were failing, especially in under- resourced areas,” said Soledad Hiciano, Executive Director of ACDP.  “Since mayoral control, I have been cautiously optimistic about the overall direction of the school system.  In 2002, state lawmakers took a courageous step by enacting mayoral control.  This June, they need to again pass the law, with the core of accountability intact.”

The bus tour concluded on Monday evening with a rally at Harlem Children’s Zone attended by more than 1,000 parents and kids where both Geoffrey Canada, Learn NY Board Chair and President & CEO of the Harlem Children’s Zone, and Sister Paulette LoMonaco, Learn NY Board Member and Executive Director of Good Shepherd Services, spoke to the crowd after showing a video about the importance of mayoral control.

“Under mayoral control the public schools are making progress and low-income children of color are closing the achievement gap. We applaud our leaders in Albany – Assembly Speaker Silver, Senate Majority Leader Smith, and Governor Paterson – for supporting renewal of mayoral control with a mayoral majority on the Panel for Education Policy.  We urge them now to avoid proposals, like “fixed terms,” which would take us back to the bad old Board of Education days, when members too often ceased to represent the communities they were appointed to serve, and instead engaged in infighting that paralyzed progress. We cannot gamble with our children’s future. We cannot risk an unaccountable PEP,” said Geoffrey Canada.

“I’ve spent the last 30 years helping students at risk of dropping out get back on track to graduation. For the longest time, community organizations like mine created successful programs to get students back in school, but without effective government programs, we could only serve a fraction of kids that needed our help,” added Sister Paulette LoMonaco. “That all changed in 2002 thanks to mayoral control. Finally someone was accountable for our children’s education, and they were forced to fix the drop-out problem.   With mayoral control, every student has a better chance at graduating and going on to have a successful career. New York City needs mayoral control.”

Over the past 10 months, Learn NY’s grassroots coalition has listened to 16,000 parents’ experiences in the public schools under mayoral control and participated in hundreds of events at schools, community centers and social service agencies.  Nearly 8,000 parents have become vocal advocates for the renewal of mayoral control by testifying at legislative hearings or by writing, calling and visiting their State Legislators.

Learn NY is a nonprofit organization dedicated to ensuring that every New York City student receives a high-quality education. Learn NY was founded by Geoffrey Canada in July 2008 to advocate for the reauthorization of the mayoral control law.

·         Geoffrey Canada, Chair, is a nationally recognized leader for his pioneering work helping more than 17,000 children and adults in Harlem and as a passionate advocate for education reform. He has been the President and Chief Executive Officer for Harlem Children’s Zone since 1990.

·         Reverend Dr. Calvin O. Butts, III, is Pastor of the nationally renowned Abyssinian Baptist Church and was instrumental in establishing two public schools in Harlem. He is also President of SUNY College at Old Westbury.

·         Sister Paulette LoMonaco has been the Executive Director at Good Shepherd Services for 28 years. There, she helps over 20,000 vulnerable youth and their families “make a safe passage to self-sufficiency” through her work in 29 schools throughout Brooklyn and the Bronx.

·         Rossana Rosado is Publisher and CEO of El Diario/La Prensa. Rosado is a strong advocate for education reform and a respected leader throughout New York City. She has led El Diario/La Prensa since 1999, when she became the first Latina in the country to become the CEO of a major newspaper. 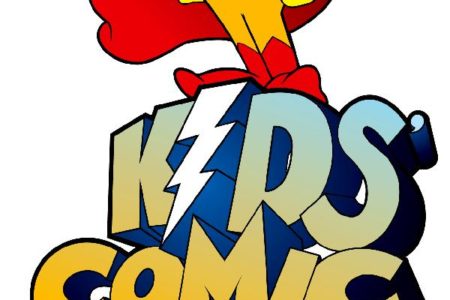