Police arrested a 23-year-old man in Bronx early Sunday morning after authorities say he pointed a gun at an officer. Police are also seeking a second man who they say was shooting at the suspect who was arrested.

According to police, two plain-clothed officers and a lieutenant in an unmarked patrol car heard shots fired near the intersection of East 188th Street and Webster Avenue just before 3:00 a.m. As the officers approached the intersection more shots were heard a block away.

The lieutenant then observed a man who has been identified as Jarius Copper with a gun as more shots were heard ringing out in his direction, police said. The lieutenant exited the patrol car, identified himself as police and ordered Copper to drop the weapon. Copper then turned and pointed his gun at the lieutenant, at which point authorities said the lieutenant fired five shots at the suspect.

Copper fled the scene, but was apprehended a few blocks away without incident. He had been shot in the in the left ankle by the lieutenant.

Police are also searching for a second suspect, Anderson Puntiel, 21, pictured below, who is still at large. Officers said they saw Puntiel firing at Copper.

Information on a lawyer for Copper, who is facing charges that include attempted murder and attempted felony assault, was not immediately available. 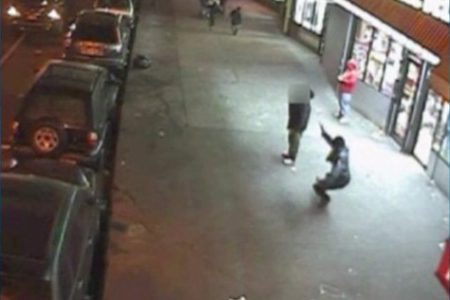